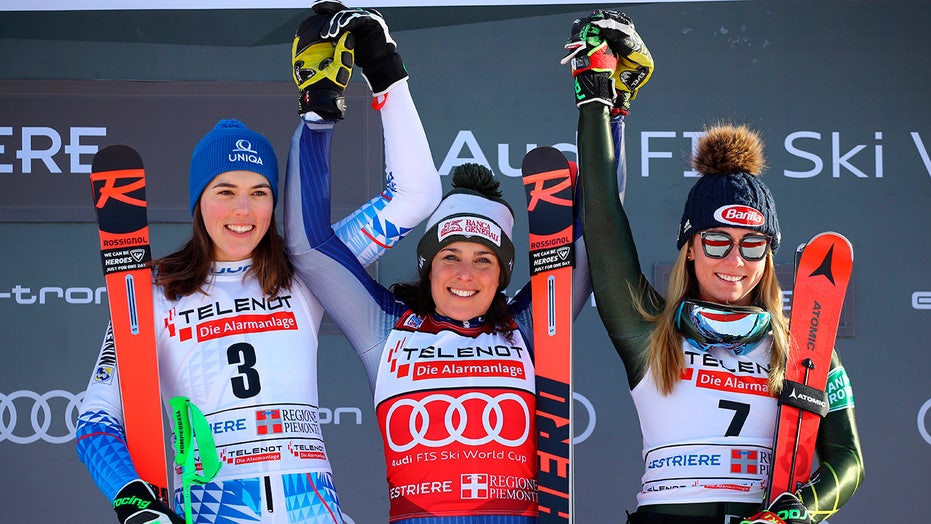 In a World Cup race that nearly ended in a triple dead heat, Federica Brignone and Petra Vlhova shared a giant slalom victory Saturday in which Mikaela Shiffrin finished 0.01 seconds behind in third.

“I’ve also been on the good side of the hundredths many times," Shiffrin said. "It happens sometimes like that, too.”

Brignone led after the first leg and was ahead at the final checkpoint of her second run on the Giovanni Agnelli course before crossing with the exact same time as Vlhova.

“It felt like having a heart attack,” Brignone said. “The race was right on the razor’s edge.”

Her mother, Maria Rosa Quario, won a World Cup slalom on this course in 1983, and as an Italian, Brignone had immense home support.

“I haven’t been able to hear anything besides people screaming my name since this morning,” she said after extending her lead in the discipline standings to 61 points ahead of Shiffrin. “Winning in front of all these people is amazing. It’s hugely emotional.”

It was the second consecutive victory for Vlhova, who also won a slalom in Flachau, Austria, on Tuesday, and the 12th career World Cup win for the Slovakian.

Shiffrin has now uncharacteristically gone four straight races without a win. But the American skier maintains a comfortable lead of 233 points over Vlhova in the overall standings.

“I was really happy with my skiing today,” Shiffrin said. “I was so happy with my second run. I was pushing a lot more and I felt like the timing was a lot better.”

It marked the first time that the World Cup stopped in Sestriere, which hosted races during the Turin Olympics in 2006, in four years.

Conditions were perfect, with sunny skies after overnight snow on the upper section.

With racers requiring more than 70 seconds to complete the course, it marked one of the longer tests on the women’s circuit.

A parallel giant slalom race is scheduled for Sunday on the Agnelli course.