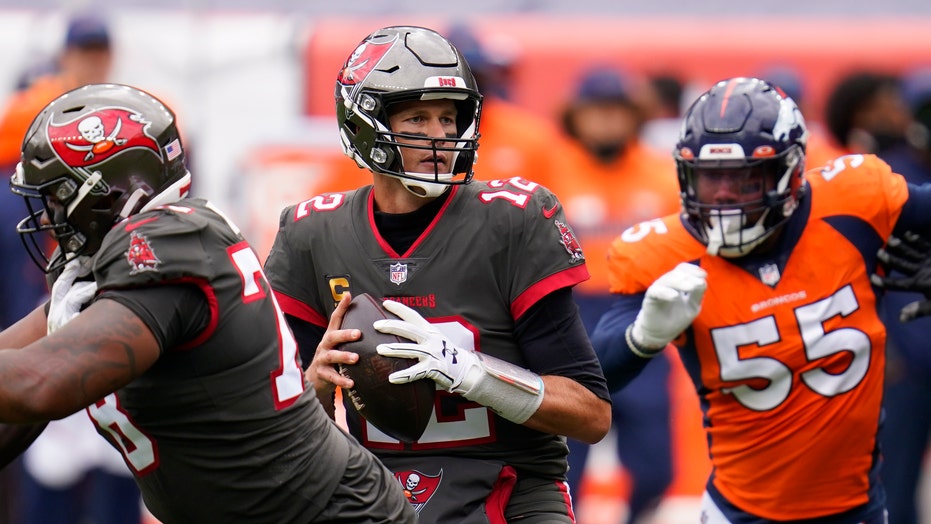 Before kickoff, Tom Brady sauntered over to Peyton Manning, who owns four fewer Super Bowl rings but has something Brady desperately craves: a championship with a second team.

“It was good to see him,” Brady said after leading the Tampa Bay Buccaneers past Manning’s former team 28-10 in Denver on Sunday. “He’s familiar with a lot of guys we have on our staff. I’ve known Peyton for a long time, almost 20 years. It was great to see him and his kids.”

Brady didn’t use to like seeing Manning on this field in the Mile High City, where he and his old team, the Patriots, lost twice to Manning and the Broncos in the playoffs.

“I love seeing him,” Brady said. “It was unexpected, but great for me to be able to see him and his kids.”

Just like Manning was at this stage in 2012 after coming over from Indianapolis, Brady is still adjusting to his new surroundings and he finds fault more than fulfillment even in a resounding victory.

“There’s still a lot to learn, a lot to grow, a lot of room for improvement. I know everyone feels that way,” Brady said after throwing for 297 yards and three TDs. “By no means was this nearly close to what we’re capable of.”

Brady had some company in his success Sunday: Rob Gronkowski caught a half dozen passes and Shaq Barrett celebrated his homecoming with a pair of sacks, one for a safety.

With his first road win for the Bucs (2-1), Brady evened his career record against the Broncos at 9-9 with just his fifth win in a dozen trips to Denver.

Before Sunday, the Broncos were the only team in the NFL with a winning record against the six-time Super Bowl champion.

The Broncos (0-3) completed a second straight winless September under head coach Vic Fangio, who donned a face shield a la Andy Reid after getting fined $100,000 for failing to wear a face mask last week.

Barrett, who led the league last year with 19½ sacks in his first season in Tampa, picked up his first sacks of this season in the city where he played from 2014-18 after starring at Colorado State.

“It was a normal morning,” Barrett said. “It wasn’t until I got to the stadium was when I started feeling the emotion and excitement and enthusiasm.”

Barrett's second sack of Jeff Driskel, who started in place of Drew Lock (shoulder), came in the end zone for a safety that pushed the Bucs’ lead to 25-10.

Afterward, Barrett performed the signature sack dance of Bradley Chubb, a friendly jab at the 2018 first-round pick whose selection helped Barrett decide to leave Denver after that season.

“Shaq is one of the best edge rushers in the game,” Chubb said, adding he'll always appreciate Barrett's tutelage of him as a rookie and is glad to see him having success now.

With his full complement of receivers finally available, Brady looked like the methodical QB he was for two decades in New England, driving the Buccaneers on scoring drives on four of five first-half drives.

Chris Godwin caught a 10-yard touchdown pass in his return from a concussion before leaving in the second half with a hamstring injury and Mike Evans had two 1-yard TD grabs as the Bucs took a 23-10 halftime lead.

And just days after insisting he was in Tampa to serve as “a blocking tight end,” Gronkowski caught six passes for 48 yards after getting shut out last week and coming into the game with just two receptions for 11 yards.

“It just felt good to be out there making a couple of plays, get involved in the passing game,” Gronkowski said.

He was glad to help Brady look good again, too.

“There’s been people talking garbage about him since I started playing with him like 10 years ago, saying he didn’t have anything left in the tank,” Gronkowski said. “That’s simply not true.”

Sam Martin was blocked on his first punt when rookie long snapper Jacob Bobenmoyer didn’t rise out of his stance fast enough to block Patrick O’Connor, who swept past the snapper to block the pun t, then recovered the ball at the Broncos 10-yard line. Three plays later, Godwin reached over the goal line for Tampa Bay’s first score.

Driskel fell to 1-8 as a starter. He hit Tim Patrick for a 7-yard score just before halftime but he was benched in the fourth quarter for Brett Rypien, who was called up from the practice squad Saturday.

Rypien completed his first eight passes for 53 yards before Mike Edwards stepped in front of Jerry Jeudy at the goal line for a one-handed interception on fourth-and-1 from the 13.

Rypien's uncle, Mark, played in Brady's first start back in 2001 against the Colts.

Fangio wasn’t ready to declare his starting quarterback for Thursday night’s game at the Meadowlands against the Jets. He could go back to Driskel, stick with Rypien or even turn to Blake Bortles, who joined the team Thursday.

No matter who it is, the Broncos don’t have much time to ponder their problems.

In addition to the 5,700 fans that were allowed into Empower Field, the Broncos put more than 1,800 cardboard cutouts of the characters from “South Park” in the south stands on Sunday. Cartman, Kenny et. al were masked up and socially distanced just like the real fans in the lower four levels of the Broncos’ 77,000-seat stadium.