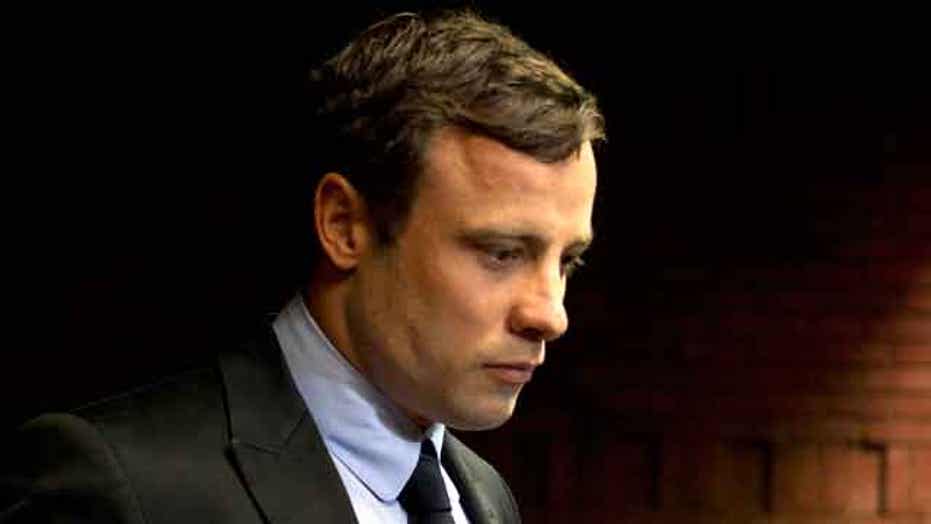 PRETORIA, South Africa – A woman screamed and then there was silence, according to South African prosecutors pressing a premeditated murder case against Oscar Pistorius. Next, the indictment says, witnesses heard gunshots and more screaming at the home of the Paralympic champion, who says he shot his girlfriend by mistake on Valentine's Day.

The sequence of events outlined Monday could bolster an argument that the double-amputee Olympian was intent on killing Reeva Steenkamp after an altercation and was not reacting fearfully to what he thought was an intrusion in his home, as he has said. Prosecutors revealed a list of more than 100 witnesses, some of whom live in the gated community where she was killed.

Pistorius wept and prayed in court as he held hands with his brother and sister before being served with the indictment. The athlete will face an additional charge of illegal possession of ammunition when his blockbuster trial starts on March 3 in a court in the South African capital, Pretoria.

The indictment in the Pretoria Magistrate's Court yielded new details about how prosecutors will pursue a case that has gripped the world because of the celebrity status of Pistorius, who overcame his disability to become a global phenomenon, only to see his name and accomplishments tarnished by his role in a violent death. The timing of the indictment was melancholic because Steenkamp would have celebrated her 30th birthday on Monday.

The main charge laid by prosecutors carries a mandatory sentence of life imprisonment with a minimum of 25 years in prison if Pistorius is convicted. The prosecution's allusion to a possible fight between the couple at Pistorius' villa before the shooting raises the possibility of a motive.

Pistorius denies committing murder and says he mistook Steenkamp for a dangerous nighttime intruder. He says he thought she was in bed when he fired four shots through the locked toilet door, and only shouted at her to call the police before realizing what had happened. Steenkamp was hit three times by the shots.

Prosecutors also said in the indictment papers that Pistorius shot "with the intention to kill a person," and even if his story is found to be true, he was still guilty of murder. That secondary argument seemingly allows for the possibility that Pistorius could escape the more serious charge of premeditated murder, but still be convicted of murder without premeditation, which carries a sentence of 15 years in prison.

South Africa does not have the death penalty.

The state hinted that its case would hinge on the witnesses who say they heard a woman scream before the gunshots inside the gated complex in the pre-dawn hours of Feb. 14.

"Some of the state witnesses heard a woman scream, followed by moments of silence, then heard gunshots and then more screaming," the prosecution said in the 11-page indictment.

The court set March 3-20 as the trial dates. Prosecutors submitted a list of 107 witnesses who they can call at the trial, including members of Pistorius' own family: His uncle Arnold, sister Aimee and brother Carl. Also listed were people who lived or worked in the gated community where Steenkamp was killed, as well as police officers, paramedics, doctors and friends of Steenkamp.

In some more new detail, prosecutors said the 29-year-old Steenkamp died just after 3 a.m. on Feb. 14 of multiple gunshot wounds, according to the autopsy.

Pistorius, 26, wore a dark suit on Monday and had longer hair than during his last appearance in June. The athlete wiped away tears with a tissue before he sat in the dock with his head bowed.

Just feet away, some of Steenkamp's friends also sat in Courtroom C. They had earlier told South African media that she had planned to go to Las Vegas to celebrate her 30th birthday.

Pistorius stood and spoke twice during the proceedings, first responding to the magistrate's question at the start on whether he was OK by saying: "Under the circumstances, ja (yes)."

He also was asked if he understood the indictment and he said, softly, that he did.

Prosecutors said the second charge of possession of illegal ammunition relates to a lack of proper licensing for .38 caliber bullets found at Pistorius' home. Pistorius shot Steenkamp with his licensed 9mm handgun.

The trial will be held at another court, the North Gauteng High Court in Pretoria, where a judge will ultimately pronounce the athlete innocent or guilty. South Africa does not have trial by jury.

"We are thankful that a trial date has been set and that we can now start preparing for the court case," Pistorius' uncle, Arnold, said in a statement.

Although the word "premeditated" was not used in the indictment, prosecutors said the main charge was premeditated murder.

"When you talk of intentional, it's premeditated. Intentional. He wanted to do that," prosecution spokesman Medupe Simasiku said.

Marius du Toit, a defense lawyer and former state prosecutor in South Africa who is not involved in the case but has been following it, explained that the country didn't use the term premeditated in its indictments, but the legal section quoted in the indictment related to a charge of premeditated murder and the state was seeking a life sentence.

This month, the office of South Africa's police commissioner said detectives, forensic experts, ballistics experts, psychologists and other professionals are confident they have the evidence to convict Pistorius after a six-month investigation into the killing.

The most telling evidence -- apart from the witness testimony -- may be in records on cell phones found at Pistorius' home and through examination of the door through which Pistorius shot. The trajectory of the bullets could show if Pistorius was standing on his stumps when he shot, as he has said, or if he was on his prosthetics, as the prosecution has said.