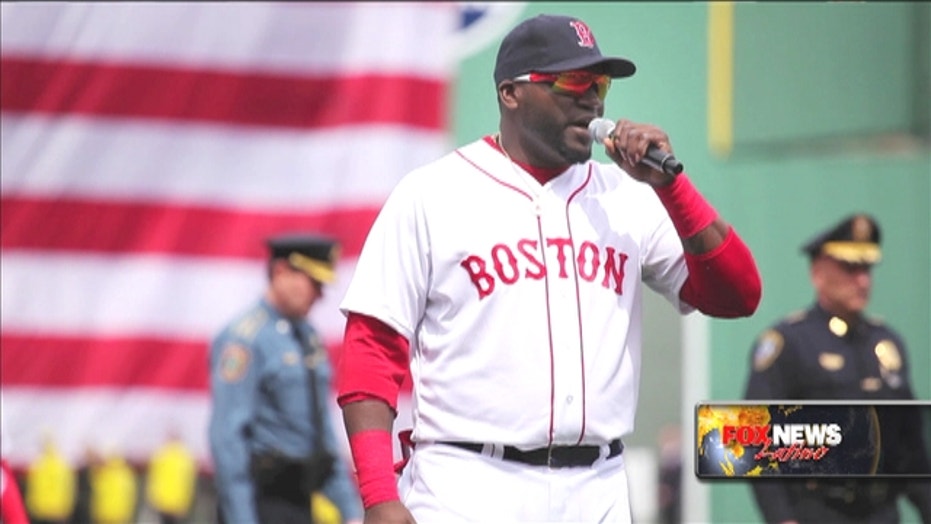 David Ortiz talks about PEDs and a new documentary

Boston Red Sox slugger David Ortiz opens up about a documentary about his role in helping Boston recover from the bombing at the marathon.

He is the face of the Boston Red Sox and one of the most instantly recognizable baseball players in the world.

He has helped a once-troubled franchise win three World Series championships, and he helped reunite a city distraught over a series of frightful events.

And he has done it all with his inimitable style.

Now David Ortiz is the subject of a new documentary coproduced by Relativity Sports and Major League Baseball Productions called “David Ortiz In The Moment.” Fox News Latino spoke to “Big Papi” before the July 17 debut on the EPIX streaming platform.

The movie follows Ortiz through the 2013 Boston Marathon bombing and the season that followed.

In no small part, it was his speech at Fenway Park on April 20, just a few days after the bombing, that helped galvanize the feelings of so many in the city about that horrifying week.

“[The bombing] was something terrible that happened to all of us,” Ortiz told FNL in a wide-ranging conversation. “I wasn’t looking at it as a baseball player, I was looking at it as just another citizen.”

The year ended in triumph for the Red Sox, with a six-game World Series victory over the St. Louis Cardinals.

“I had never seen a city go back on [its] feet like we did last year,” Ortiz told FNL.

A recent incident involving comments made by MLB Network announcers about Ortiz and performance-enhancing drugs left a sour taste in the Dominican slugger’s mouth.

Does the future Hall-of-Famer believe that the succeed-at-all-costs environment of youth baseball in places like the Dominican Republican can push young athletes toward easy, chemical improvements?

“Not really,” he told FNL. “I think that’s a matter of your own choice.”

He also mentioned that when he was developing as an athlete, he didn’t feel pressure to take PEDs.

On contract with the Red Sox through 2017, Ortiz says he isn’t thinking about his retirement, at least not yet.

And he said that he isn’t certain that when he does retire, he will want the farewell-tour treatment that his friendly rivals on the New York Yankees, Mariano Rivera and now Derek Jeter, have received.