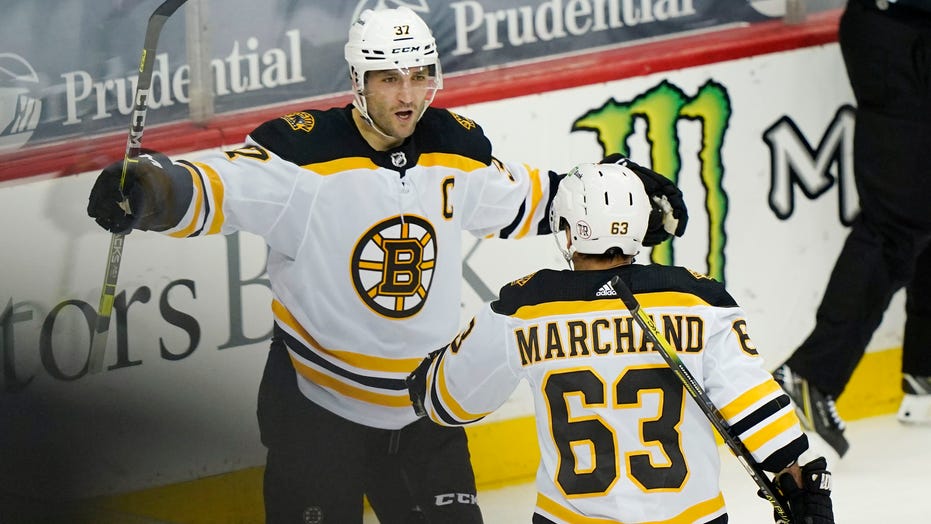 Not only did the Boston Bruins play like a team looking to nail down its spot in the playoffs a week early, they looked like one capable of going a long way in the run for the Stanley Cup.

Captain Patrice Bergeron scored his 20th goal of the season and the Bruins clinched their fifth straight playoff berth with a dominating 3-0 victory over the New Jersey Devils on Monday night.

Tuukka Rask stopped 20 shots for his second shutout of the season and Nick Ritchie broke a scoreless tie in the second period and the Bruins won their fourth straight game and ended the Devils' three-game winning streak.

"It’s always the goal during the regular season to get your ticket, get in, and go from there," Bergeron said. "Obviously, we know we’re a great team. I know where we’re at. I know we can keep improving and we’ll use the last few games to work on our game and make sure we’re ready for Game 1 of the playoffs."

Defenseman Matt Grzelcyk scored on a deflection off Devils defenseman Ryan Murray late as the Bruins won for the 10th time in 12 games. Brad Marchand, who was playing in his 800th NHL game, and Bergeron got the assists on the third goal.

"This is a great accomplishment; it’s definitely not easy," Rask said after winning his sixth straight game. "You look at our division it’s tough, there’s no room to have slumps. You got to be able to keep up with other teams; we’ve had our ups and downs, but I think lately we’ve kind of found our game and our identity and kind of stuck to it."

Boston got off to a dominating start. The Bruins took the first 11 shots of the game and limited New Jersey to nine in the first 40 minutes in taking a 2-0 lead. The Bruins finished with a 42-20 shots advantage.

"I think we saw a completely different Bruins team," Devils coach Lindy Ruff said. "They were ramped up, getting ready for the playoffs and knew they could clinch. Those two top lines have a lot of speed, and the defense has a lot of speed. I just thought they brought their ‘A’ game."

Devils goalie Scott Wedgewood gave New Jersey a chance, stopping all 16 shots in the first period and 35 of 37 in the first 40 minutes. He finished with 39 saves.

"I thought he gave us some real good goaltending," Ruff said. "He made several key saves just to allow us to hang around. We didn’t have a lot of opportunities."

Ritchie got the game's opening goal at 9:08 of the second period, taking a cross-ice pass by defenseman Jakub Zboril and beating Wedgewood with a one-timer from the right circle.

Bergeron's 20th was a perfect play by the "Perfection Line". Marchand got the puck from David Pastrnak, skated around the Devils' net and found Bergeron alone in front.

Rask's toughest saves of the game came against Devils captain Nico Hischier. He made a pad save on a breakaway in the first period and stopped a backhand in close with under five minutes to play.

"You play for an opportunity to play for the Cup so we’ve accomplished the first part of that, getting into the playoffs," Bruins coach Bruce Cassidy said. "We had our share of adversity as much with COVID rescheduling and injuries and using different people but the flip-side of that, the positive side of that is you learn a little bit about guys and they have to step up. We came out of it OK."

The Devils called up forward A.J. Greer from Binghamton on Monday and he was in the lineup. He was acquired from the Islanders in the deal that sent Kyle Palmieri and Travis Zajac to New York. This was his first NHL game in two years. His night ended in the third-period fight against Bruins defenseman Connor Clifton.

NOTES: Bruins D Mike Reilly got a night off after an 11-game run after being acquired from Ottawa. ... Zboril was in the lineup for the first time in seven games. ... Devils F Mikhail Maltsev missed the game. He sustained a lower-body injury after being hit by a shot in Philadelphia on Saturday. ... Devils coach Lindy Ruff said D P.K. Subban and Jonas Siegenthaler are getting closer to skating with the team after being sidelined by COVID-19.

The teams finish their eight-game season series here Tuesday night. The Devils lead 4-1-2, while the Bruins are 3-3-1.