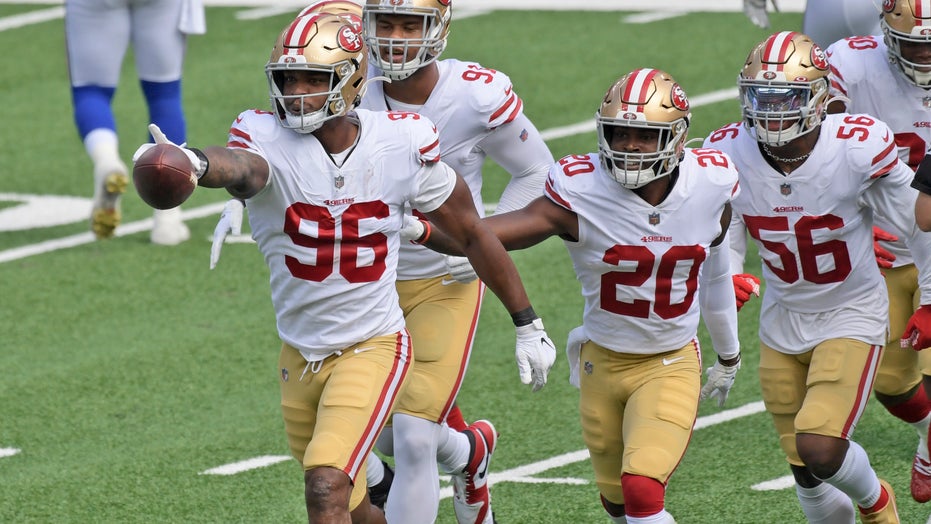 The way the San Francisco 49ers played, missing quarterback Jimmy Garoppolo and a slew of starters wasn't an issue against the woeful and winless New York Giants.

Backup Nick Mullens threw for 343 yards and a touchdown and the Niners controlled the ball on offense, took it away on defense and had another easy day on the East Coast in a 36-9 win at MetLife Stadium Sunday.

"I real happy with this week," said coach Kyle Shanahan, who wore a mask this week after being fined $100,000 for failing to do so last week in a game that saw his team lose six starters to injuries on a new field his players criticized.

“We pulled together throughout the week," Shanahan said of the concern about the field. “I just got real good energy and vibe from the guys from Wednesday when we started practicing all the way to last night at the hotel meeting. And then today. I thought they played very hard all four quarters, I was very proud of our team.”

San Francisco played a near flawless game as Mullens hit 25 for 36 passes, including a 19-yard TD pass to running back J eff Wilson. It outgained New York 420-231, held the ball for 39:44 and forced three turnovers without giving the ball up. The Giants did not run a play in the red zone.

“Nick was great, very poised,” Shanahan said. “We went on a lot of long drives today. They’re better than not scoring, but long drives can get a little bit exhausting. Especially for me. I don’t want to have to call that many plays.”

Wilson, Jerick McKinnon and Brandon Aiyuk also scored on runs for the Niners (2-1), who stayed in West Virginia to prep for the game. Robbie Gould added three field goals for San Francisco, which last week beat the Jets 31-13 here and denied Giants coach Joe Judge a chance for his first win this week.

The Niners had Garoppolo (ankle), defensive linemen Nick Bosa and Solomon Thomas (knees) and running backs Raheem Mostert and Tevin Coleman hurt against the Jets. They complained about the new turf after the game, saying it was “sticky” and led to injuries.

The NFL had the field re-examined and it meet all standards.

San Francisco scored on seven of its first eight possessions. It would have been all eight but a snap-hold problem led to Gould missing a 55-yarder. He connected from 52, 32 and 26 yards. The Niners' ninth possession ended the game

New York, which came into the game as the NFL's lowest-scoring offense, got three field goals from Graham Gano, the second of which tied the game at 6-all midway through the second quarter. Quarterback Daniel Jones turned the ball over twice.

New York was tied 6-6 midway through the second quarter when the Niners drove 75 yards in 12 plays to take the lead, added by an illegal contract penalty against rookie Darnay Holmes on third-and-22.

McKinnon scored on a 10-yard run with 1:13 left in the half and a 26-yard field goal by Gould pushed the lead to 16-6 at the half. The field goal was set up when linebacker Fred Warner stepped in front of Jones' pass at the New York 32.

Jones finished 17 of 32 for 179 yards, but the second half was all San Francisco.

Wayne Gallman and recently signed Devonta Freeman got most of the carries replacing Saquon Barkley, who was lost for the season to a knee injury last week. Jones once again was New York's best rusher, gaining 49 yards on five carries. However, he was stopped on a fourth-and-1 sneak at his 30 late in the third quarter that sealed the game.

Mullens was making his first start since replacing an injured Garoppolo for eight games in the 2018 season. He was 8 of 11 for 71 yards in relief last week. His career-best game was 414 yards against Seattle in 2018.

49ers: Were also without TE George Kittle, CB Ahkello Witherspoon, and LB Dre Greenlaw for the game. They lost Emmanuel Moseley to a (head injury) and TE Jordan Reed (ankle) Sunday. Mosley was hurt making a tackle on a Jones' run early in the second quarter. Reed, who caught two TDs last week filling in for the injured Kittle, was hurt late in the first trying to make a catch in the end zone. He returned briefly in the second quarter.

Giants: Safety Jabrill Peppers did not play after he sprained an ankle trying to block.

San Francisco returns home after a week on the East coast and faces Philadelphia Eagles in a Sunday night game.