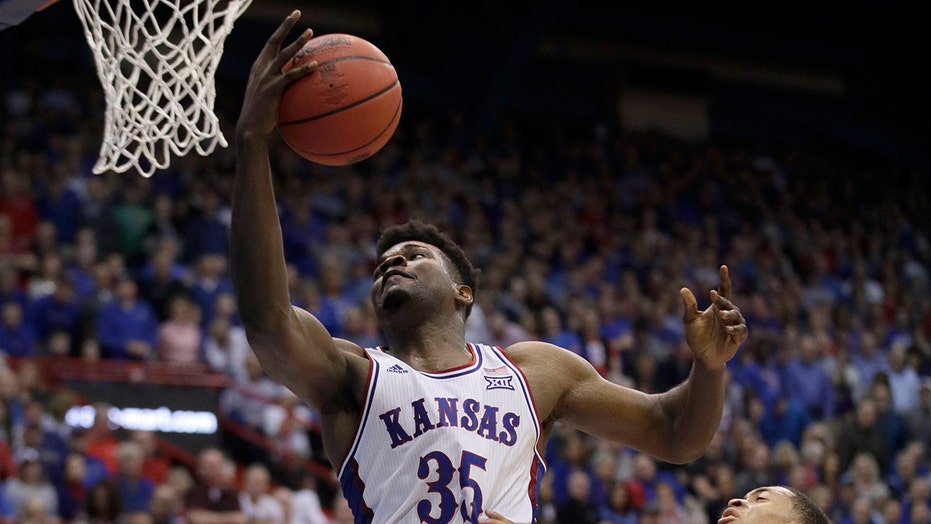 Imagine what Kansas center Udoka Azubuike would have accomplished against TCU on Wednesday night if he was healthy.

Or if he made his free throws.

The bruising 7-foot center walked gingerly into Allen Fieldhouse on his sore ankle for his final home game and proceeded to score a career-high 31 points while pulling down 14 rebounds, leading the top-ranked Jayhawks to a 75-66 victory over hot-shooting but foul-prone TCU to clinch at least a share of the Big 12 regular-season title.

Azubuike finished 13 of 14 from the field and swatted five shots, a mere four days after hurting his ankle in a win over Kansas State. The best defense the Horned Frogs played on him was to foul him; he was just 5 of 13 from the line.

“It's a good day to be a Jayhawk,” Azubuike said after delivering a farewell speech. “We're No. 1. Big 12 champs. My last home game at the Fieldhouse. It was good, but it was a little emotional being my last game.”

Devon Dotson added 18 points for the Jayhawks (27-3, 16-1), though he also gave coach Bill Self and about 16,000 fans a scare when he left briefly midway through the second with what appeared to be an ankle injury of his own. Their leading scorer returned a few minutes later, allowing the Senior Night celebrations to begin in earnest.

It was the 62nd regular-season conference title for the Jayhawks, and it came one year after a third-place finish ended a run of 14 straight crowns. They can win it outright by beating Texas Tech on Saturday or if Baylor loses at West Virginia.

“You know, the season we had last season, we came up short of that goal of winning it. It's a good feeling, the guys getting the trophy, bringing it back to where it belongs,” Dotson said. “Hopefully we'll keep it going.”

The win also was No. 500 for Self at Kansas, which ranks second at the school behind only building namesake Phog Allen.

Desmond Bane had 24 points for TCU (16-14, 7-10), sending him past Dick O'Neal and Carven Holcombe and into third place in school history with 1,744 career points. Edric Dennis Jr. hit six 3-pointers and finished with 18 points.

“I was proud of how we played,” Horned Frogs coach Jamie Dixon said. “I don't know that I've ever been in that much foul trouble that quick in my life but we managed to do it. We adjusted and did some things. We fought.”

Azubuike dominated the opening minutes of the game, scoring the first 10 points for Kansas. And when the Horned Frogs finally triple-teamed him down low, he deftly fed Marcus Garrett underneath a defender for an easy layup.

Compounding the problems for Dixon: His team hit just one of its first 10 field-goal attempts.

The momentum changed when Bane hit a 3-pointer. Dennis later made five 3s in a flurry of a few minutes, and the Horned Frogs finished the half by making nine of their last 10 shots to take a 37-35 lead into the locker room.

TCU continued to fire away in the second half from beyond the 3-point line, where the Big 12's best team from the perimeter at one point hit nearly as many triples as it had attempted 2-point field goals. Kansas countered by dumping the ball inside to Azubuike, who either threw down a dunk or continued to compound TCU's foul trouble.

Kansas finally went on one of its familiar Fieldhouse runs.

Trailing 46-42 with 14:18 to go, Azubuike caught a pass inside and dunked. He added back-to-back blocks a few minutes later, each turning into buckets at the other end. By the time Christian Braun gathered a loose ball and made a teardrop floater, the Jayhawks had put together a 15-1 run and built a 58-46 lead with 10:34 left.

The festive feel that suddenly swept through the Phog was quickly quelled when Dotson went down.

The All-America candidate was guarding the ball along the sideline when he took an awkward step and landed on his backside. He remained there until a dead ball and then hobbled straight to the bench, where he buried his face in a towel as one of the team's physicians checked on his left shin and ankle.

Dotson wound up sitting for just a few minutes, though, and returned to help Azubuike lead the Jayhawks to the finish.

“When I came here I thought Azubuike was a one-year guy, and here he is four years later. Maybe he'll come back next year,” Dixon said with a wry grin. “I guess he's a little banged up, but he sure didn't look like it.”

TCU was coming off a win over then-No. 2 Baylor that buoyed its hopes of slipping into the NCAA Tournament. But after hanging with the Jayhawks for a while, the Horned Frogs' second chance at springing a big upset in the span of a week came crashing down. They were done in by 14 turnovers and far too many fouls.

Kansas struggled to find much offense outside Azubuike until late in the game. The health of the 7-footer, along with that of Dotson and Garrett, will be crucial to watch as the Big 12 and NCAA tournaments approach. Garrett has been wearing a walking boot around campus to take the pressure off his own foot the last couple weeks.

Kansas wraps up the regular season Saturday at Texas Tech.