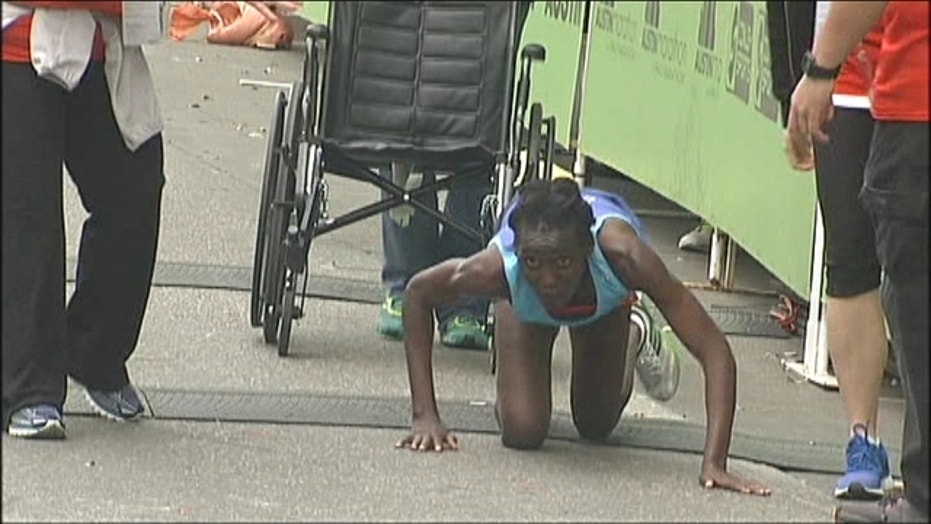 Woman crawls her way to third place in Austin Marathon

With nurses by her side, she crawled inch-by-inch to the finish line. If anyone helped her, Hyvon Ngetich would have been disqualified.

More than 15,000 runners from 40 different countries took to the streets of downtown Austin on Sunday.

The Austin Marathon, Half Marathon and 5K brought some of the world's fastest runners to the Lone Star State, but one woman in particular inspired everyone with her unfailing willpower.

Hyvon Ngetich, 29, led the women for most of the race.

"I was like winning, you know. I was 500 kilometers in front. I looked back and I didn't see anybody," said Ngetich.

But things didn't go as planned for Ngetich.

"For the last two kilometers, I don't remember. Finish line, I have no idea," she said.

Ngetich was running on empty with less than a mile to go. Her body shut down on the final stretch.

"When she came around the corner on her hands and knees, I have never, in 43 years of being involved in this sport, have seen a finish like that," said race director John Conley.

"Running, always you have to keep going, going," said Ngetich.

With nurses by her side, she crawled inch-by-inch down Congress Avenue. If anyone helped her, Ngetich would have been disqualified. So the crowd watched as she struggled and cheered as she pushed through the pain.

"They saw that spirit and that hard-wired athletic commitment to get to the finish," said Conley.

Ngetich said she didn't want to give up.

"I remember the lady, the bicycle lady, she was telling me, 'You are almost,' so I was just like going because I'm almost," said Ngetich.

With every last drop of determination she had, Ngetich crossed the finish line on her hands and knees.

"[Ngetich] finished without any help and got a very honorable third place," said Conley.

Conley said he will adjust Ngetich's prize money so she gets what she would have been awarded at second place.

As for Ngetich, she said she wants to come back and win the Austin Marathon in 2016.

For more stories go to myfoxaustin.com