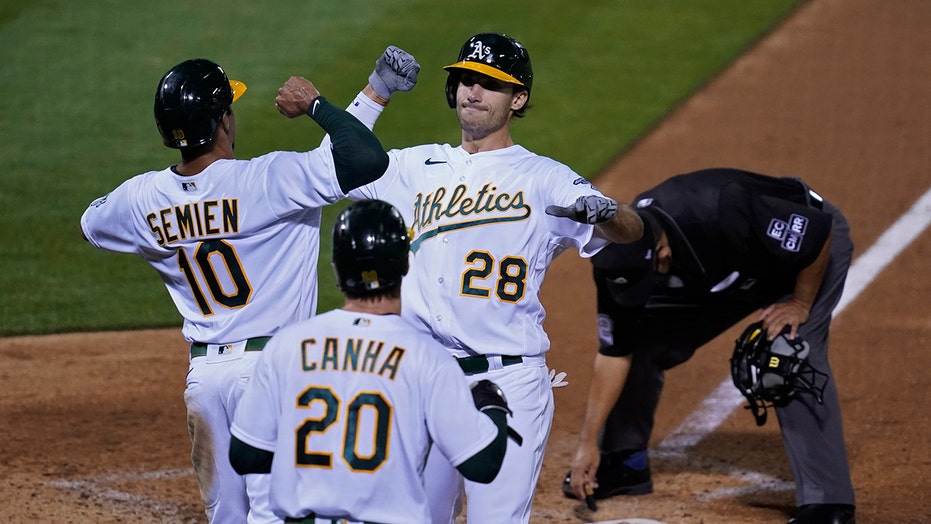 An AL West title will mean so much more than simply clinching a playoff berth given how the past two seasons have gone for the Oakland Athletics.

Then, the A’s might let loose and celebrate a little. But not just yet.

They secured a third straight playoff berth with Seattle’s loss to San Diego and a 6-0 win against the San Francisco Giants on Friday night, highlighted by Matt Olson’s three-run homer.

“Clinching the playoffs is the goal every single year. Exciting, but winning the division I think is going to be a lot better for us,” winning pitcher Chris Bassitt said. “It was literally another win. We have a lot bigger goals.”

The A’s scoreboard read “POSTSEASON BOUND” high above the cutouts.

Oakland is in the playoffs for the sixth time in nine seasons and now shifts its attention to the division title, which could be locked up Saturday. The A's haven't captured the West since 2013, winning 97 games each of the past two seasons to finish in second place behind Houston and before losing the AL Wild Card Game both years.

Olson connected in the third inning of a balanced offensive attack for the A’s in the opener of the second round of the 2020 Bay Bridge Series.

Jake Lamb's RBI single in the first staked Bassitt (4-2) to a quick lead. The right-hander struck out seven over 6 2/3 innings to win his third straight start.

“He's been absolutely terrific,” manager Bob Melvin said, “probably as consistent as we've had all year.”

Tommy La Stella and Marcus Semien also singled in runs for the A's, who finally got a day off Thursday following a grueling stretch with 16 games in 13 days with three doubleheaders.

San Francisco hardly had to travel far to continue its road trip. The Giants were scheduled for games in Seattle earlier this week but smoke from all the West Coast wildfires created dangerous air quality and the clubs instead played at Oracle Park in San Francisco on Wednesday and Thursday.

“It's nice that everybody got to sleep in their own beds last night,” Giants manager Gabe Kapler said, noting he and some players drove themselves to the Coliseum rather than riding a team bus. “Considering that these are road games and we did just get to play two road games in our ballpark, there have been a lot of challenges throughout this season and so those are two things that we can point to as positives and pluses.”

The A's played a Monday doubleheader in Seattle, and players expressed concern about the air.

“The air quality is much better than we last saw it here, it certainly is better than Seattle, too,” Melvin said.

“Not a good performance from our offense. I think all of our players will tell you that,” Kapler said. “We have to play better baseball than that down the stretch if we’re going to get into the postseason.”

Giants: RF Mike Yastrzemski, who left Thursday's win against Seattle in the third with tightness in his right calf, had an MRI exam Friday that showed a mild calf strain. He is listed day to day. The Giants aren't using the injured list for him. “Yaz is important enough to this club where we really don't know how long it's going to be, whether it's one, two, three days or more and we want to ensure that we have (options) there,” Kapler said.

Athletics: RF Stephen Piscotty missed his fourth straight game with a sprained right knee. The A's were going to put him through batting practice to determine his status for Saturday. ... LHP rookie A.J. Puk underwent debridement shoulder surgery — removing debris from around the labrum and rotator cuff — and a cleanup from bursitis Wednesday by Dr. Neal ElAttrache in Los Angeles. Puk, who didn't pitch this year and missed most of last season following Tommy John surgery in April 2018, has begun physical therapy and will remain in Southern California to get the stitches removed Monday and begin throwing in about 12 weeks. Oakland is hopeful he'll be ready by the start of spring training.

A's RHP Daniel Mengden has been medically cleared from a positive COVID-19 test Aug. 28. He has been asymptomatic throughout and resumed throwing off the mound at the club's San Jose alternate site Friday. He is slated for a simulated game Saturday.

Oakland completed its trade with Texas that brought lefty Mike Minor to the A's on Aug. 31 by sending minor league infielder Dustin Harris and minor league outfielder Marcus Smith to the Rangers as the players to be named later.

RHP Kevin Gausman (3-2, 4.05 ERA), scratched last Sunday because of elbow soreness, will pitch for the Giants on Saturday afternoon. A's LHP Jesús Luzardo (2-2, 4.32) looks to end a four-start winless stretch in which he is 0-2.