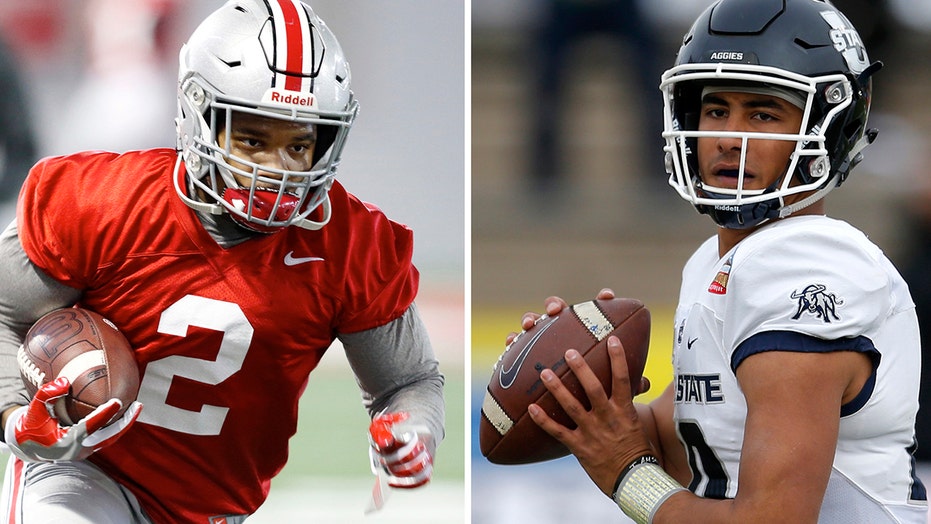 Last season, Khalil Tate was on the short list of preseason favorites for the Heisman Trophy.

As Arizona prepares to open this season on Aug. 24 at Hawaii, the junior quarterback is a longshot.

Tate rushed for 1,411 yards and 12 touchdowns in 2017, including two games of 230 yards or more. Last season, he had only 224 yards and two scores on the ground as he dealt with a myriad of injuries, including a sprained ankle suffered in the second game that hampered him for the rest of the year.

If there was a bright spot to Tate's season though, it was that he threw for 2,530 yards with 26 TDs against eight interceptions. If Tate is able to stay injury free and emerge as the dual-threat quarterback many thought he would be last year, he could find himself in the Heisman discussions again.

"I'm 100 percent healthy right now. When I'm healthy, I can do a lot as you guys have seen in the past," Tate said following a recent scrimmage.

Besides Tate, there are some other players who can be considered darkhorse contenders to be in New York on Dec. 14:

With new offensive coordinator Kendall Briles still struggling to find a quarterback, the Seminoles will be counting on Akers a lot early in the season. Akers was considered one of the nation's top running back prospects when he arrived in 2017, but averaged only 4.4 yards and had only one 100-yard game last season.

Bryant was also a Heisman favorite last year, but he lost the starting job at Clemson and ended up transferring. He is trying to adapt to more of a pro-style offense, but if offensive coordinator Derek Dooley can find a way to utilize Bryan's dual-threat capabilities, he could become the second transfer in three seasons to win the Heisman.

Daniels started as a freshman and struggled as the Trojans were one of last season's disappointments. Grant Harrell is the new offensive coordinator and is bringing the Air Raid to the Trojans, which should take advantage of Daniels' abilities.

The junior rushed for 1,053 yards last season, but averaged only 4.6 yards per carry while sharing the backfield with quarterback Dwayne Haskins and running back Mike Webber. With Haskins and Webber gone, as well as questions about who will be the starting quarterback, Dobbins could be a focal point early.

Love passed for 3,567 yards with 32 touchdowns and six interceptions. He was 10th in the nation in passing efficiency, but isn't known by many because he doesn't play for a Power Five school. If Love is going to emerge as a contender, he is going to need big games against Wake Forest (Aug. 30) and LSU (Oct. 5).

Not only did the junior make many highlight-worthy catches last season, but he averaged 168 yards and two touchdowns in three games against Top 10 programs. A receiver has not won the Heisman since Michigan's Desmond Howard in 1991, but there will be plenty of attention again on the Big 12.