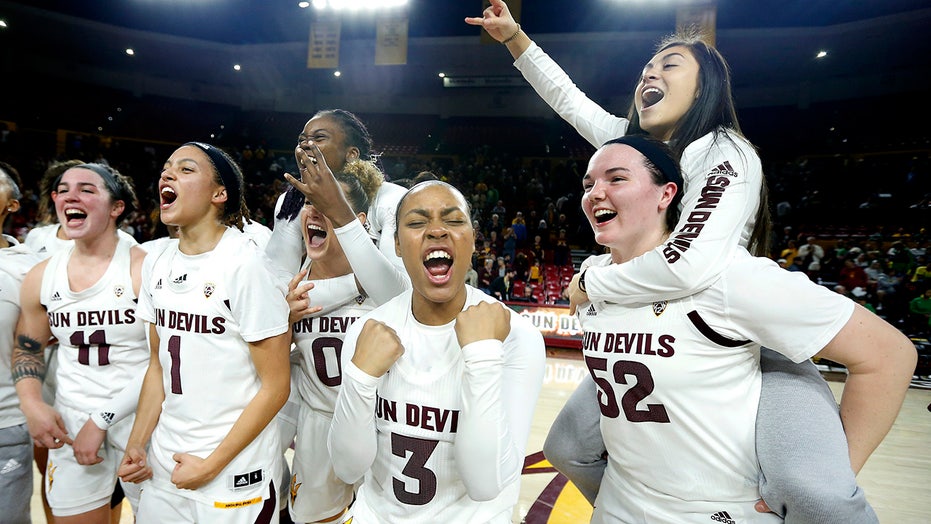 Arizona State kept No. 2 Oregon within reach, just as it did against its previous two ranked opponents.

Unlike losses to No. 18 Arizona and No. 8 UCLA, the Sun Devils were the ones making the key plays down the stretch, pulling out one of the program's biggest wins under coach Charli Turner Thorne.

“This was up there on my list, just for fun games, fun wins,” said a wet-haired Turner Thorne, who was doused with Powerade bottles by her players. “We just stuck together. They were locked in even when we weren't doing the things we wanted to be doing.”

Arizona State (12-4, 2-1 Pac-12) labored offensively most of the night without point guard Kiara Russell (foot), clanging one shot after another to fall behind by 13.

Then something finally clicked.

Arizona State lost the lead, got it back and kept Oregon at arm's length with clutch plays in the closing minutes.

Ryan hit four 3-pointers and had 11 points in the fourth quarter after starting 0 for 2 from 3. Ruden scored twice inside in the final 1:13 and grabbed an offensive rebound off a missed free throw.

Reili Richardson hit four free throws in the final 15 seconds and had 10 points in the fourth quarter despite playing with the flu.

When it was over, the students stormed the court after the Sun Devils beat their highest-ranked opponent since knocking off No. 2 Stanford in the 2002 Pac-10 tournament title game.

“It shows how tough we are,” said Richardson, who had 12 points. “We're going to grind out the whole game. We're just going to fight no matter what.”

The Ducks (12-2, 2-1) dominated through three quarters before falling apart in the fourth, spoiling their chance to move to No. 1 next week following top-ranked Connecticut's loss to No. 6 Baylor on Wednesday night.

Sabrina Ionescu kept Oregon in it by scoring eight of her 24 points after Arizona State made its run, and Ruthy Hebard added 13 points. The Ducks had 17 turnovers, leading to 17 points for Arizona State, and had no answer when the Sun Devils made their push.

“They played hard and down the stretch made big shots and big plays,” Oregon coach Kelly Graves said. “That's what you've got to do in close games and we didn't. We actually looked like the inexperienced team.”

The Ducks had been on a roll since their lone loss, to then-No. 8 Louisville on Nov. 30, reeling off seven straight wins, none closer than 36 points.

The Ducks were sharp at both ends to start their two-game trip through the desert.

Oregon hit its first four shots, all in the paint, which forced Turner Thorne to call a timeout and switch to zone.

The Ducks kept making shots even after the switch, finishing 10 for 15 in the first quarter. Jaz Shelley capped it with a buzzer-beating 3-pointer to give Oregon a 23-15 lead.

“We could not throw a pea in the ocean,” Turner Thorne said.

The Ducks continued to shoot well in the second quarter, but struggled with turnovers — 10 in the first half — to allow the cold-shooting Sun Devils to hang around.

Arizona State used a short run to pull within 35-28 at halftime despite going 3 for 17 from the 3-point arc.

The trend continued in the third quarter. Oregon shot well, Arizona State didn't, yet the Sun Devils still had a shot, down 52-42.

Then came the comeback and the students storming the court, sending the Ducks to their second loss of the season.

“They deserved it more than we did,” Graves said.

Oregon had a rare night of struggling to take care of the ball and keeping its poise down the stretch to ruin a shot at moving to No. 1.

Arizona State pulled off one of the program's biggest wins with a stunning fourth-quarter comeback.