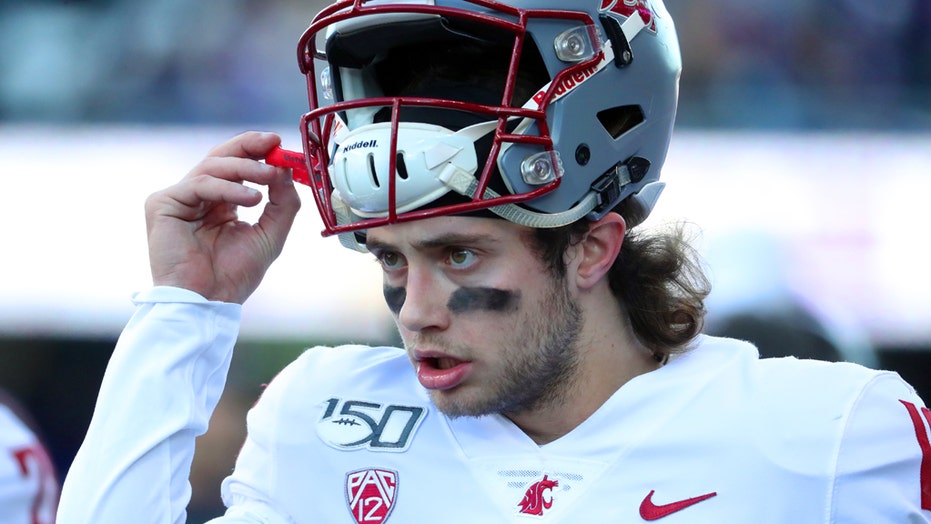 Anthony Gordon is a quarterback who is looking to make the jump from college to the pros.

Gordon had one of the more remarkable seasons in a pass-heavy Washington State offense last season and is hoping his statistical output could pique a team’s interest going into the draft.

He racked up nearly 10,000 passing yards and more than 80 touchdowns playing high school football in Pacifica, Calif., before joining the Cougars.

Here are five other things to know about Gordon.

Gordon is listed at 6-foot-2 and 205 pounds. At the Scouting Combine, Gordon measured as having 31-inch arms and 9 3/4-inch hands. Gordon impressed with the passing drills but didn’t take part in the athletic drills.

Gordon’s uncle was former MLB player Greg Reynolds, according to the Mercury News. Reynolds appeared in 33 games between the Colorado Rockies and Cincinnati Reds from 2008 to 2013. He last appeared in a minor league game in 2016.

Anthony Gordon finally got his chance to start in 2019. (Photo by Christian Petersen/Getty Images)

Gordon was redshirted his sophomore year at Washington State. He didn’t appear in a college football game until the 2018 season. He had to sit behind players like Gardner Minshew and Luke Falk before getting his chance with the Cougars.

Gordon finally got his chance to start during his senior season. He finished second in the nation in passing yards with 5,579 yards. He also had 48 touchdown passes. Washington State, however, lost in the Cheez-It Bowl, 31-21, to Air Force.

Gordon isn’t going to be among the first few quarterbacks taken off the board in this year’s draft. He’s only had one real season to prove himself. Experts believe he could fall somewhere between the fourth and seventh rounds.