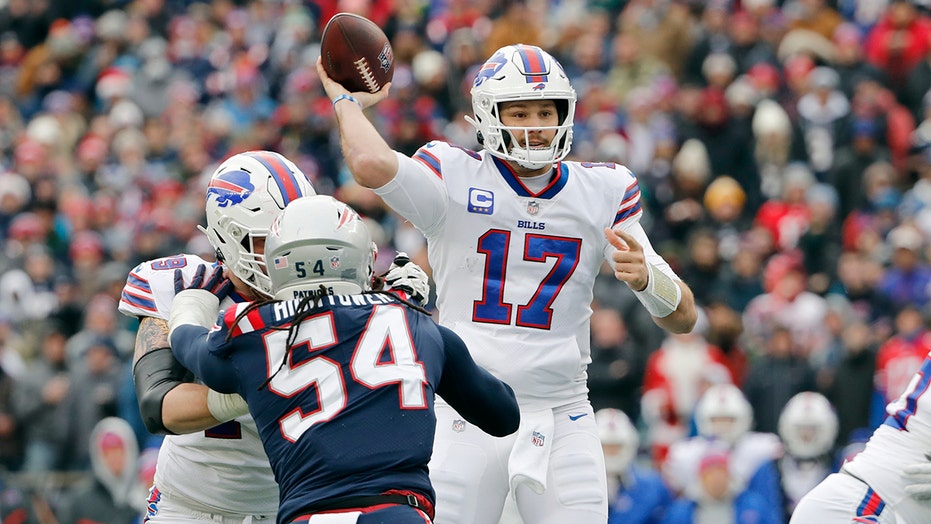 Josh Allen threw for three touchdowns and the Buffalo Bills hung on to beat the New England Patriots 33-21 on Sunday to vault themselves back into first place in the AFC East title race.

With the victory, Buffalo (9-6) now holds tiebreakers over the Patriots and Dolphins, and is in the driver’s seat to win its second straight division title.

Isaiah McKenzie stepped up in place of Bills receivers Cole Beasley and Gabriel Davis, who were both on the reserve/COVID-19 list, notching a career-high 11 catches, 125 yards and a touchdown. McKenzie’s big day came after the Bills shied away from using him even to field kickoffs during blustery conditions in Buffalo during their Week 13 loss to the Patriots.

The Bills were aggressive, going for it on fourth down three times in the first half, including a fourth-and-2 that helped set up a 12-yard pass from Allen to Stefon Diggs for a 17-7 lead. That grew to 26-14 early in the fourth quarter after running back Devin Singletary’s 2-yard touchdown run; Buffalo was denied on its 2-point conversion attempt.

The Patriots (9-6) got it to 26-21 with 7:37 to play on Damien Harris’ 8-yard TD run, his second of the game, but rookie quarterback Mac Jones struggled to find openings against the Bills’ top-ranked defense, ending his day making 14 of 32 passes for 145 yards and two interceptions.

Buffalo quickly faced third down on its next series before Allen hooked up with McKenzie for 15 yards along the sideline. The Patriots forced a fourth-and-1 on their own 34, but Allen was able to get outside for 8 yards.

The Bills were staring at third-and-10 with under four minutes to play when Allen came through again, this time creating space before flicking a pass to Diggs for 19 yards. Two plays later, Allen tossed a 2-yard touchdown pass to tight end Dawson Knox.

In Week 13, the Patriots dominated on the ground, grinding out 200-plus yards in their 14-10 win on a cold and wet night. Jones attempted only three passes in that first meeting, but got there in just two drives Sunday.

Buffalo nearly squandered an opportunity to pad their lead on their opening drive of the third quarter when Allen overthrew a wide-open Jake Kumerow in the end zone. After a pair of penalties, the Bills settled for a 34-yard Tyler Bass field goal that made it 20-7. New England trimmed the gap to 20-14 on its ensuing possession when Harris scored on a 1-yard run to cap a 14-play, 75-yard drive.

Bills: Left guard Ike Boettger was carted off the field at the 10:05 mark of the second quarter with a ruptured Achilles tendon. ... RB Devin Singletary suffered an ankle injury on the Bills’ first drive the third quarter but was able to return. … Starting right guard Jon Feliciano wasn’t cleared from COVID-19 list in time to play Sunday.

Patriots: DL Daniel Ekuale left just before halftime with an undisclosed issue but returned in the second half.