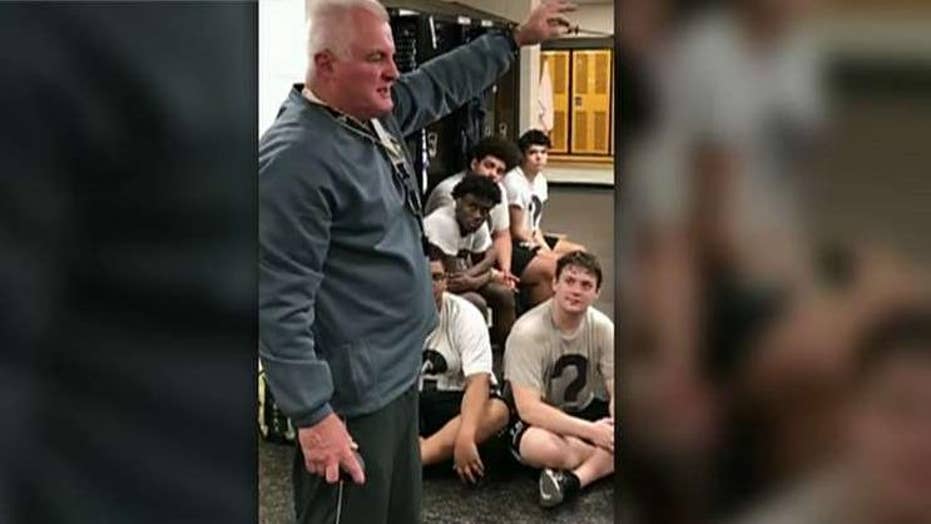 An assistant high school football coach in Alabama opens up on 'Fox &amp; Friends' on his 'Manly Monday' initiative to guide his players through the 'game of life.'

An Alabama high school football coach who went viral for showing members of his team how to change a tire said Wednesday he was surprised to see the video blow up as it did.

Steve Carter, an assistant at Athens High School, told “Fox & Friends” he’s been coaching for 40 years at nearly a dozen schools and was surprised to hear from former players about the video.

“I’m having former players from other schools calling me and texting me and different things … It’s wonderful. I didn’t even know it was going to blow up like this,” Carter said.

Carter’s unorthodox training methods were posted to head coach Cody Gross’ Twitter account. In a series of videos, you can see Carter teaching the players things like changing a tire, checking oil and transmission fluid and cutting PVC pipe with twine and string. He calls the installments “Manly Monday.”

Carter said it was Gross who asked him to start these lessons.

“We try to teach these kids about life. Cody Gross is our head coach and I’m always fixing stuff around the office and around the campus and he came to me one day and said, 'Let’s start teaching the kids how to do some practical stuff' and I said, 'That’d be a great idea.'”

Ahead of Mother’s Day, Carter said he taught some student-athletes how to make jewelry.

“We talked to them on how to love and respect your mother, girlfriend or wife and I make jewelry. You may look at a guy like me and think, 'man, he makes jewelry?' And I said, 'guys it’s not about making jewelry, it’s about doing something creative for the women you love in your life,'” he said.