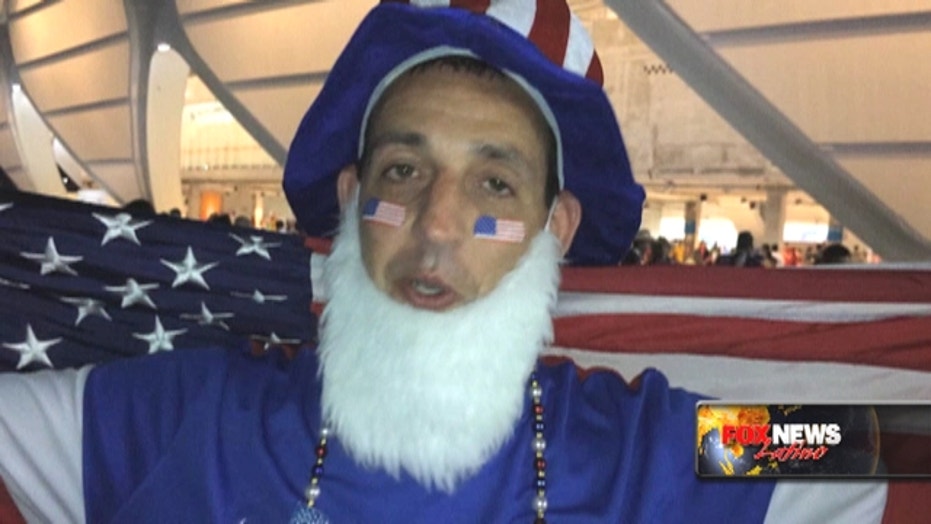 A 2-2 tie against Portugal leaves the U.S. team in a good position to qualify, but a Thursday match against Germany looms.

Manaus, Brazil – The feeling in the air as U.S. Soccer fans shuffled out of the muggy Arena Amazonia was a mix of disbelief and jubilation after the American squad tied Portugal, 2-2, in the second game of their World Cup campaign.

Second half goals by Jermaine Jones and Clint Dempsey put the U.S. up 2-1, but a last second equalizer by Silvestre Varela off a perfectly-placed Cristiano Ronaldo cross broke many U.S. fans’ hearts.

“I think that we blew it,” Dan Hall, a U.S. Soccer fan told Fox News Latino inside the stadium. “Giving that goal up in the last [few] seconds is brutal.”

U.S. soccer supporters made a strong showing at the game held in the remote capital of the Brazilian state of Amazonas. Of the more than 40,000 people packed into the sweltering stadium Sunday evening, a large contingent of the U.S. support group, the American Outlaws, took up a sizeable portion of the seats and cheers of “I Believe That We Can Win” and “U-S-A” echoed around the basket-shaped arena.

“It’s incredible,” Karl Hren, an American Outlaw from Raleigh, N.C., told FNL. “We were spread out through the entire stadium and it was still incredible.”

The World Cup in Brazil has proven that soccer is growing in leaps and bounds in popularity in the U.S. American fans bought more tickets to the tournament –196,838 of them - than any other country outside of Brazil. Tickets to the U.S.-Germany match are among the most expensive of the Cup.

While there was a sense of disappointment that the U.S. wasn’t able to punch their ticket to the next round by beating Portugal, many American fans were still pleased with the result against a team that featured the FIFA player of the year, Cristiano Ronaldo, and said they looked forward to the Germany game in Recife on Thursday, June 26.

“We got four points, and we played well,” Philip Erlich of Baton Rouge, La., told FNL. “We did enough to go through, and we are going to go through and we’re going to take down Germany.”

The teams in Group G – the U.S., Germany, Ghana and Portugal – all still have a shot at advancing to the knockout round.

A tie against Germany would send the U.S. through, but match them up against a tough Belgian squad that won its first two games.

To avoid Belgium and take on possibly Algeria instead, the U.S. would have to actually defeat the Germans, however unlikely that might seem.

Even a loss wouldn’t necessarily mean the end of red, white and blue’s World Cup run, but it might require the assistance of the tie-breaking gods.

“We’ve got a great chance in the ‘Group of Death,’ they say,” U.S. goalkeeper Tim Howard said after Sunday’s game, according to the Associated Press. “I think we had one foot in the door. Realistically we’ve given ourselves every chance to advance. We’re optimistic.”

The streets surrounding the Arena Amazonia were filled with American flags and U.S. fans whose dripping face paint stained their Clint Dempsey and Michael Bradley jerseys.

“I’m very happy, very proud of our guys,” Erlich said. “The boys they did their job, and they played well.”

“One nation, one team” he added, quoting the national team’s motto. “We’re going to go through.”