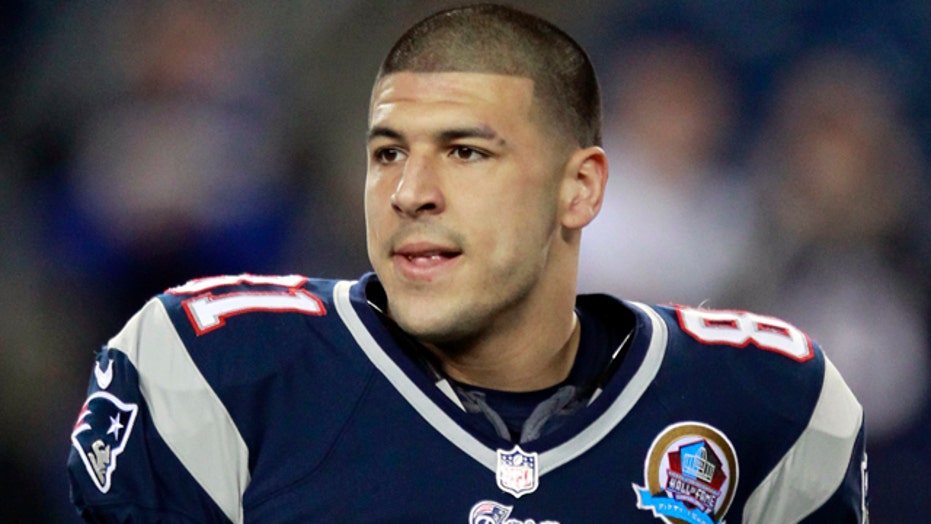 New England Patriots tight end Aaron Hernandez, under scrutiny in the investigation of a homicide near his home in Massachusetts, is also reportedly the subject of a lawsuit alleging he shot a man at a Miami strip club in February.

The Boston Herald reports that Alexander Bradley claims in court filings that Hernandez fired a gun at him during an argument, destroying his right eye and causing extensive damage resulting in several surgeries "to reconstruct his face."

Bradley, a Connecticut resident, claims in the lawsuit that he has become "substantially disabled" as a result of the alleged shooting and will require medical care for the rest of his life, the newspaper reported.

Police in Florida reportedly closed the case without filing charges after investigating the incident. Bradley did not name Hernandez as the shooter at the time, according to the Herald.

Lloyd's family said he was a semi-pro football player with a connection to Hernandez, whose home was searched by police. His mother, Ursula Ward, had said earlier police had told her the body was that of her son, who played for the Boston Bandits.

"My son is a wonderful child," she said, crying as she spoke outside the family's home in Boston's Dorchester neighborhood. "He's a family guy. He hasn't done anything to hurt anyone."

Ward would not say how Lloyd knew Hernandez and did not say if police told her how her son died. An uncle said Lloyd had a connection to Hernandez but wouldn't elaborate.

State police returned for the second day Wednesday to Hernandez's sprawling home in an upscale subdivision in North Attleborough, on the Rhode Island state line not far from the Patriots' stadium in Foxborough. They referred questions about their investigation to Sutter, the district attorney.

Sutter's office said investigators were asking for the public's help to find a silver mirror cover believed to have broken off a car between Boston and North Attleborough.

Hernandez attorney Michael Fee acknowledged media reports about the state police search of Hernandez's home as part of an investigation but said he and the player wouldn't have any comment on it.

Sports Illustrated, citing an unidentified source, reported Tuesday that Hernandez was not believed to be a suspect in what was being treated then as a possible homicide.

Two troopers knocked on the door of Hernandez's house Wednesday morning, but no one answered. The night before, police spent hours there as another group of officers searched the industrial park.

Later Wednesday, at least seven state troopers searched both sides of a road just off the street where Hernandez lives. The officers used thin poles to pull back plants and search through undergrowth along the road.

Hernandez returned home during the early afternoon Wednesday. He did not speak to a crowd of reporters staked out about 100 feet away.

The Patriots drafted Hernandez out of Florida in 2010. Since then, he has combined with Rob Gronkowski to form one of the top tight end duos in the NFL. He missed 10 games last season with an ankle injury and had shoulder surgery in April but is expected to be ready for training camp. Last summer, the Patriots gave him a five-year contract worth $40 million.

Patriots spokesman Stacey James said the team did not anticipate commenting publicly during the police investigation.

Sports Illustrated reported that the link between Hernandez and the case was a rented Chevrolet Suburban with Rhode Island plates that police had been searching for. The Associated Press could not independently confirm the report.

Lloyd's neighbor Larry Connors said a black Suburban with Rhode Island license plates was towed out of the yard of Lloyd's house after his body was found. Lloyd had been driving it for a few days, but Connors had never seen it before that.

Neighbor Paul Sandefur, a retired transit police officer, said he had known Lloyd since he was in diapers and was at a loss to explain what might have led to his death.

"He'd tease me about coming over to play basketball because I used to tell all the kids I could beat them," Sandefur said. "He was an exceptional kid. It's just inconceivable that something would happen to him."

Both neighbors thought Lloyd worked in construction, and neither knew of any connection between him and Hernandez.

Bandits coach Olivier Bustin, who last saw Lloyd on Saturday at a team scrimmage and heard on Tuesday he had been killed, said he never knew him to be in trouble.

"He was a personable guy, just a guy who was well-liked by everybody on the team," said the coach, who said Lloyd didn't start but played a big role on defense.

Lloyd's sister, Olivia Thibou, said her brother always had her back.

"And, you know, it's just tough that he's not here," she said. "As my mom said, just give us our time to grieve. And I hope that they find out who did it."