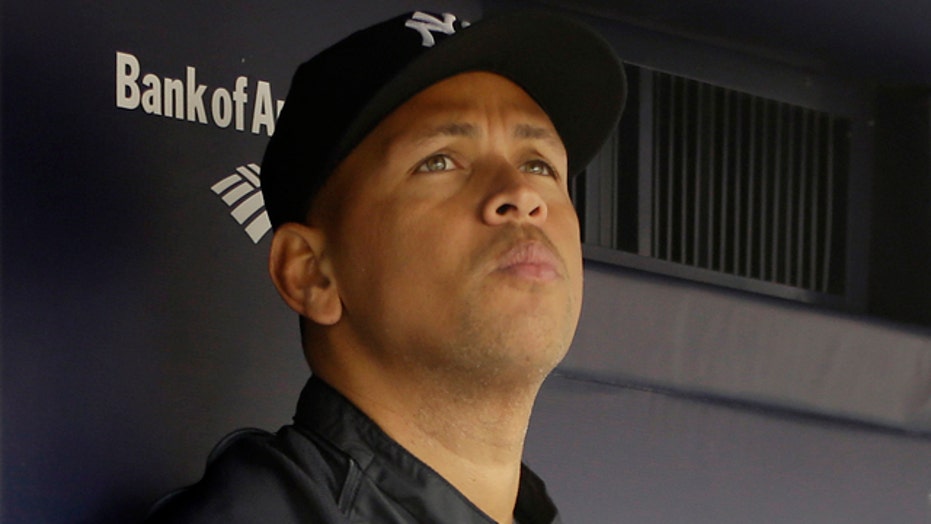 Is A-Rod’s baseball career over?

Alex Rodriguez told a news conference Monday the past seven months had been a “nightmare, probably the worst time of my life” but refused to go into specifics about his suspension by Major League Baseball for the remainder of the current season and all of next year for using performance-enhancing drugs,.

He also said he had to stand up for himself because "if I don't defend myself, no one else will."

Rodriguez, the game’s highest paid player, said repeatedly he wanted to “let the process play out” as he addressed reporters before taking the field against the Chicago White Sox, where he was jeered by fans as he stepped to the plate.

Rodriguez singled in his first plate appearance in the second inning, but had less success his next three times up, flying out twice and striking out looking as the Yankees lost, 8-1.

"There's nothing about it that's been easy," Rodriguez said. "All of it has been challenging. I'm sure there's been mistakes made along the way. We're here now. I'm a human being. I've had two hip surgeries. I've had two knee surgeries. I'm fighting for my life."

He had said earlier he planned to appeal  the suspension, the harshest of some 13 penalties doled out by the league Monday.

“It’s not going to get any easier,” he said. “It’s probably going to get harder.” But he added he was “thrilled and humbled to have an opportunity to put on this uniform again and play major league baseball again.”

Under the league's collective bargaining agreement, Rodriguez, who has missed the entire season battling injuries and is just now ready to come off the disabled list, can play while appealing the suspension, which is effective Aug. 8.

"I am disappointed with the penalty and intend to appeal and fight this through the process," Rodriguez said in a statement. "I am eager to get back on the field and be with my teammates in Chicago tonight. I want to thank my family, friends and fans who have stood by my side through all this."

Rodriguez's suspension "is based on his use and possession of numerous forms of prohibited performance-enhancing substances, including Testosterone and Human Growth Hormone, over the course of multiple years," and for "engaging in a course of conduct intended to obstruct and frustrate the Office of the Commissioner's investigation," according to a news release from Major League Baseball. Rodriguez would forfeit his salaries from the remainder of this season and all of next, but is owed $61 million by the Yankees from 2015-17, and could earn millions more as he closes in on the all-time home run record.

The Yankees released a statement after the suspensions came down expressing support for the league but sharply addressing claims that they are trying to get out of what has become a lousy contract.

"The New York Yankees in no way instituted and/or assisted MLB in the direction of this investigation; or used the investigation as an attempt to avoid its responsibilities under a player contract; or did its medical staff fail to provide the appropriate standard of care to Alex Rodriguez," the statement read.

In addition to Rodriguez, baseball handed out 50-game suspensions to a dozen other players for violating Major League Baseball’s drug policy. Only Rodriguez was expected to appeal.

The Texas Rangers said Monday that they were “disappointed” in Cruz. Cruz said in a statement that he had a gastrointestinal infection that went undiagnosed at the beginning of 2012, making him unsure if he would be physically able to play.

"Faced with this situation, I made an error in judgment that I deeply regret, and I accept full responsibility for that error,” Cruz said. “I should have handled the situation differently, and my illness was no excuse.”

Peralta said he got suspended because he made a “lapse in judgment.”

“I apologize to everyone that I have hurt as a result of my mistake, including my teammates, the Tigers' organization, the great fans in Detroit, Major League Baseball, and my family,” Peralta said.

The San Diego Padres also said the organization stands behind the league's decision to suspend Cabrera.

"The accepted suspensions announced today are consistent with the punishments set forth in the Joint Drug Agreement, and were arrived at only after hours of intense negotiations between the bargaining parties, the players and their representatives," Major League Baseball Players Association Executive Director Michael Weiner said Monday afternoon.

The Union's members have made it clear that they want a clean game," Weiner added. "They support efforts to discipline players, and harshly, to help ensure an even playing field for all."

Nationals pitcher Gio Gonzalez and Orioles infielder Danny Valencia, whose names surfaced in early reports about the now-closed Biogenesis of America anti-aging clinic in Florida, have been cleared of any wrongdoing.

Rodriguez is the most famous player linked to Biogenesis, and the Yankees expect him to be charged with interfering with MLB's investigation, resulting in a harsher penalty than the other 13 players facing discipline.

If Rodriguez challenges the suspension, his appeal would be heard by arbitrator Fredric Horowitz.

Yankees outfielder Curtis Granderson was excited Rodriguez could play during an appeal.

"I want him back with us. This is arguably one of the best hitters of all time," he said. "Having him in the lineup is obviously going to be very positive for us."