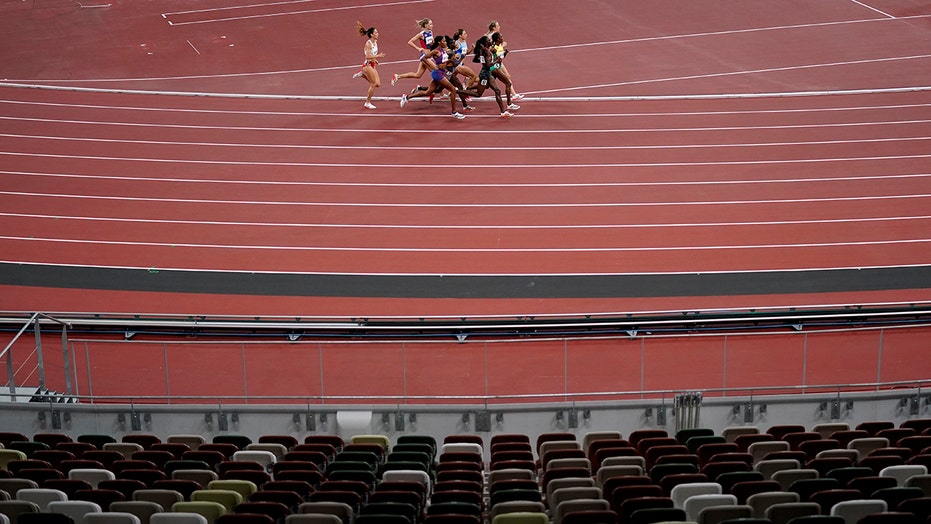 Any sporting event is, at its heart, a show. It has the actors on center stage, performing for the rest of us. It has the spectators, sitting in their seats watching raptly. And — in modern times, at least — it has the "home" audience, which in the past half century of growing video viewership has far outpaced the numbers of those actually in attendance.

At their halfway point, the Tokyo Olympics are still grappling with the fact that in that equation, the middle group — those spectators on the scene who cheer, gin up enthusiasm and add texture to the proceedings — couldn't come. And in the COVID era, a key question presents itself: If an Olympics falls in the forest and nobody there hears it, did it really make a sound?

The Japan organizing committee's president, Seiko Hashimoto, thinks it will. She said a couple weeks ago that she wasn't worried that a locked-down, crowdless Olympics — what she calls the "`Tokyo model" — would fundamentally change the experience. "The essence of the Games," Hashimoto said, "will remain the same."

They won't, of course. They already aren't. And in fairness, how could they, when part of that very essence — the roar of a real, live crowd — has been excised out of (you know the phrase by now) an abundance of caution?

During the 18 months of the coronavirus pandemic, the relationship between the watched and the watchers in audience-based public events has shifted tectonically. Productions that normally happen in front of crowds — crowds that, it's worth noting, both watch performances and sometimes become an integral part of them — have changed in various ways.

Some entertainment venues turned to presenting performances to people in parked cars, much like drive-in movies; one comedian, Erica Rhodes, filmed a TV special outside the Rose Bowl in California and relied on honking horns for the bulk of her audience response. It added a kinetic, if cacophonous, energy.

On TV, the iconic game show "The Price Is Right," whose fundamental DNA relies on audience members to "come on down!" and become contestants, shut down for six months and then returned with mostly empty seats and contestants who aren't surprised to be chosen.

But when it comes to fan interaction, sports, arguably, have been affected the most of all.

Last summer, once big league baseball resumed without fans in the seats, the sport deployed recorded, piped-in crowd noise for the benefit of both athletes and fans watching at home. Most ballparks even created cardboard figures (customizable for a price, of course) to mimic spectator action, a novel if laughable pivot.

It was, though, part of a cultural landscape that has been under construction for a long time.

Sixty years ago, Daniel J. Boorstin, a historian who became the Librarian of Congress, came up with a term: the "pseudo-event." Among its traits: It is not spontaneous, but planned. It is created primarily for the purpose of being reproduced. And its success is measured in how widely it is reported, and in how many people watch it.

Pair that with these astonishing figures: The International Olympic Committee generates almost 75% of its income from the sale of broadcast rights. About 40% of the IOC’s total income is from one source — NBC, the U.S. broadcast rights-holder. And estimates suggest canceling the Tokyo Olympics might have cost the IOC $3 billion to $4 billion.

"The audience in the venue is no longer the economics. The media is the economics," says Robert Thompson, director of the Bleier Center for Television and Popular Culture at Syracuse University.

That was an emerging axiom in the late 20th century, and a more ubiquitous one today. But there's another question to ask, too: Does the lack of on-site crowds impact the quality of at-home viewing?

On one hand, the vantage points from your recliner are better than anything you could see in person. The best ticket at an Olympic venue couldn't begin to approximate what an NBC camera sees. "We’re not only in the best seats; we’re in seats that don’t even exist," Thompson says.

There is a very real purpose to crowds, beyond how they impact athletes and performers who are actually there. Research has shown that at-home audiences watching competition — and other forms of entertainment — react to the feeling that they have proxies who are really in the arena. That, in effect, if we can't be there, we know there are people like us who are.

"There’s a reason sitcoms have laugh tracks. Seeing and hearing other people enjoy a thing leads us to enjoy that thing," says Jennifer Talarico, a professor of psychology at Lafayette College who studies how people remember personally experienced events.

Laugh tracks, in use since TV's early days, were designed to prompt audiences about when to find something funny. But the underlying message is deeper: If we know others are watching and being entertained, it paves the way for our entertainment. That bears out today in the popularity of YouTube videos showing gamers as they game, and in shows like Britain’s "Gogglebox," in which TV audiences watch ... TV audiences watching TV.

There's the pathos factor, too. The prevailing American Olympic TV narratives — emotion-saturated backstories about individuals, backed by loved ones, working hard and triumphing — are typically intertwined with crowd shots that include those very supporters watching the achievements happen.

"That doesn’t carry through when you can’t pan through to Mom in the crowd," Talarico says. "Mom isn’t there. She’s still in the same place that she was before. I think that makes the crowd aspect of the Olympics even more influential than a major league baseball game."

There are mitigating factors to Tokyo's empty seats during these Games. Social media fills in the gaps to some extent; instead of watching a community of watchers, we can now form our own.

But it's not quite the same, is it? There's a reason that young boys playing driveway basketball stop after a shot and shout, "He shoots, he scores!" before cupping their hands to their mouth to approximate a crowd's roar. There's nothing like it.

And when TV cameras pan various Olympic venues and find emptiness, or even seats painted in seemingly random drab colors to look as if there are people in them, it's clear that something — that certain something that only a crowd can provide — is glaringly absent.

In the era of screens and of vicarious watching and global live broadcasts, three simple words, "I was there," still hold power — even if you're one of the ones who aren't.