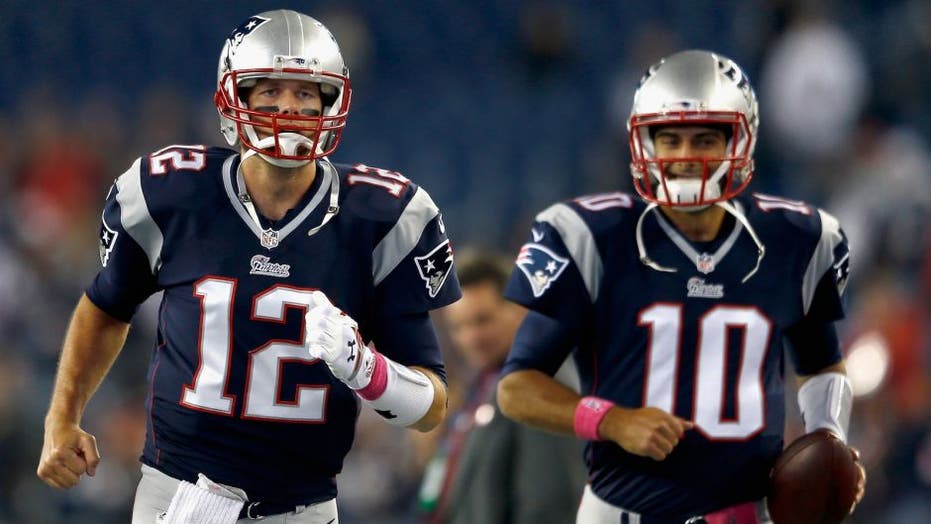 Tom Brady looms large over Super Bowl LIV even though he’s not going to play in this year's game.

San Francisco 49ers quarterback Jimmy Garoppolo was Brady’s understudy for several years during his time with the New England Patriots. Prior to the NFC Championship game against the Green Bay Packers, Garoppolo told NFL Network’s Ian Rapoport on Westwood One what he learned from Brady.

JOE MONTANA GUARANTEES HIS TEAM WILL WIN SUPER BOWL LIV: 'YOU HEARD FROM ME FIRST'

“I never wanted to be a nuisance or anything like that and ask too many questions around him, so I would try to learn from afar and really take it all in visually,” Garoppolo said. “Hear what he’s saying and things like that. A big thing, especially in the playoffs, that I learned from him was that you’ve gotta stay cool, calm, collected.

“There’s a lot of things going on. It’s a big moment. Fans are going crazy. But you kind of, as the quarterback, just have to be the eye of the storm. So that was one thing that I took from him that’s benefitted me so far.”

Brady was asked in a separate interview with Fox News contributor Jim Gray on his Westwood One radio show whether he had any advice for the 49ers star before the NFC title game.

“I think a lot of it is, you pretty much do what you’ve done all year,” the six-time Super Bowl-winning quarterback said. “You got to this point with an incredible team playing really great complementary football. It’s not about doing something different. It’s just about going out and just having really good, solid execution.

“If there’s anything I would advise people, it’s during the week not to get caught up in all the different things you can do and the media obligations and overhype it.”

San Francisco acquired Garoppolo from New England during the 2017 season. Garoppolo led the team to five straight wins at the end of that year and received a huge payday because of it.