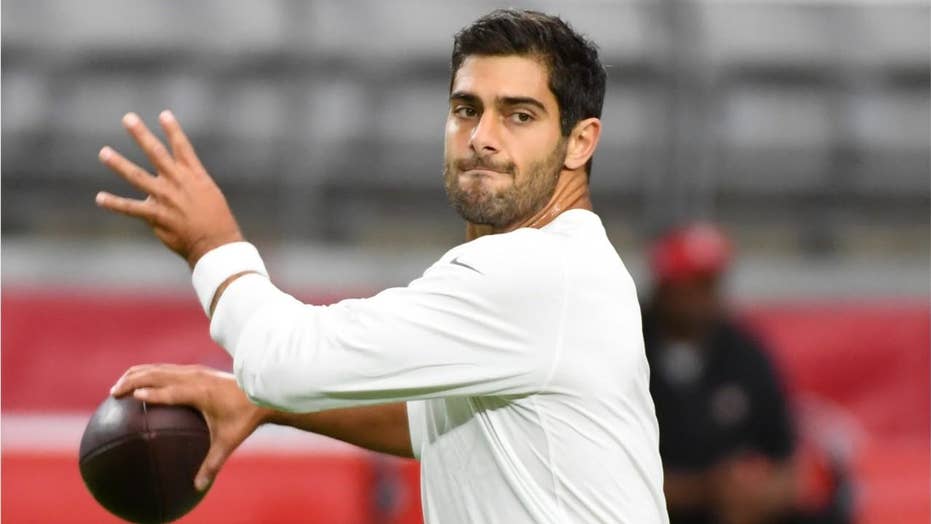 Did Jimmy G throw up a Hail Mary?

The Internet did what the Internet does after San Francisco 49ers’ quarterback Jimmy Garoppolo appeared to make a pass at veteran sideline reporter Erin Andrews following Thursday night’s game.

Garoppolo threw four touchdown passes to help lead his team to a 28-25 victory over the Arizona Cardinals, officially marking the halfway point in their undefeated season.

But on Friday morning, it wasn’t the game that fans were talking about but rather the cringeworthy exchange that followed between the 27-year-old star quarterback and the Fox sideline reporter.

Andrews interviewed Garoppolo on the field, asking him how it felt to keep the winning streak going.

Andrews appeared to grimace somewhat and, while laughing off the odd remark, replies “Happy Halloween right back at you, thank you so much.”

Garoppolo walks away and turns back to wave, saying “see you.” To compound matters, he then awkwardly stumbled into Arizona Cardinal running back Alfred Morris.

Twitter erupted with memes about “Jimmy GQ” “shooting his shot.”