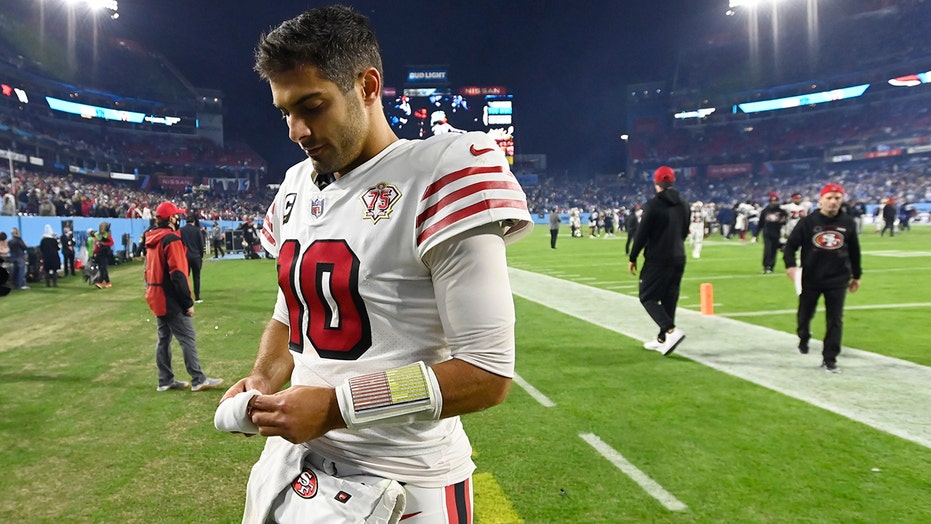 Jimmy Garoppolo injured his right thumb in San Francisco's loss at Tennessee last week and his status for the 49ers' game this week is in doubt.

Garoppolo missed practice Monday because of the injury suffered in the first half of last Thursday's loss at Tennessee and coach Kyle Shanahan said the team would have a better idea about his availability later in the week for Sunday's game against Houston.

"It’s a thumb sprain, so I think you guys know how those are," Shanahan said. "It didn’t feel great today. He wasn’t able to throw today and we’ll see how it is on Wednesday. Hopefully it’ll get better."

Shanahan said Garoppolo got hurt on a sack in the second quarter when he was driven to the ground but stayed in the game. Shanahan said he believed the injury played a role in the interception in the third quarter that set up Tennessee's first touchdown.

Garoppolo was able to lead a game-tying drive, but San Francisco lost 20-17 to the Titans.

If Garoppolo is unable to play, rookie Trey Lance would get his second start of the season. The Niners traded three first-round picks to draft Lance third overall in April, but Lance has only played five snaps in garbage time since starting in Week 5 at Arizona.

Lance went 15 for 29 for 192 yards with an interception in that 17-10 loss and also ran 16 times for 89 yards. Lance hurt his knee in that game and has been showing positive signs in practice.