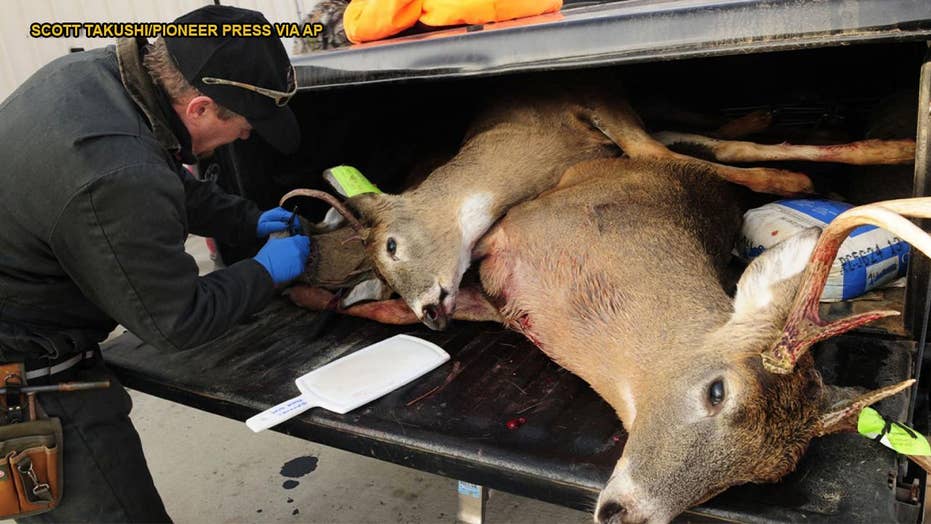 Officials are trying to prevent 'zombie deer' from entering the state of Nevada. 'Zombie deer' are creatures that have contracted chronic wasting disease, a highly contagious and often deadly affliction that has ravaged the deer population in an estimated 24 states and two Canadian provinces.

The prospects of "zombie deers" running amok have gotten worse throughout the year and Nevada regulators are trying to keep them out of the state. But it's a fight that may be difficult to win.

Known as chronic wasting disease (CWD), the highly contagious and often deadly affliction has ravaged the deer population in an estimated 24 states and two Canadian provinces, Fox News reported earlier this year. As the disease, which causes a lack of fear of humans, lethargy and emaciation, decimates deer and elk populations, Nevada officials are trying to prevent it as much as they can.

So far, officials have tested dead animals and have kept an eye on migrating elk and deer coming from Utah to look for signs of the sickness, Peregrine Wolff, a Nevada Department of Wildlife veterinarian, said. Nevada lawmakers passed a law earlier this year to keep parts of certain carcasses out of the state in an attempt to stop the spread of the disease.

FILE - In this Nov. 17, 2012, file photo, Mike Zeckmeister, a biologist with the Wisconsin Department of Natural Resources, removes the lymph nodes from one of three deer in a hunter's pickup truck, in order to test them for chronic wasting disease, at a checkpoint in Shell Lake, Wis. "Zombie deer" may sound like something in a bad B-movie, but wildlife regulators say they're real and officials are working to keep them out of Nevada. (Scott Takushi/Pioneer Press via AP, File)

CWD is not a viral or bacterial disease; rather it is transmitted by prions, protein particles that have been linked to brain diseases including mad cow disease. Prion diseases severely damage brain tissue and are incurable.

Nevada lawmakers this year banned bringing certain animal body parts into the state, including the brain and the spinal cord that can contain large concentrations of prions.

In testimony about the proposed law, Tyler Turnipseed, chief Nevada game warden, posed a scenario where local populations are infected by exposure to butchered waste dumped by a hunter passing through Nevada from another state.

In April, a ranch-raised elk in Oklahoma tested positive for the deadly disease after it died of injuries.

Although it's possible the disease could spread to humans, according to experts, the Centers for Disease Control and Prevention said there have been no cases reported of humans contracting it.

However, the CDC cautioned there are some studies that suggest CWD "poses a risk to certain types of non-human primates, like monkeys, that eat meat from CWD-infected animals" and there may "also be a risk to people."

Wolff said finding just one is rare because the disease is so contagious and it remains in the environment for years.

Wolff added that efforts to decrease the risk probably won't stop the disease at the Nevada state line.