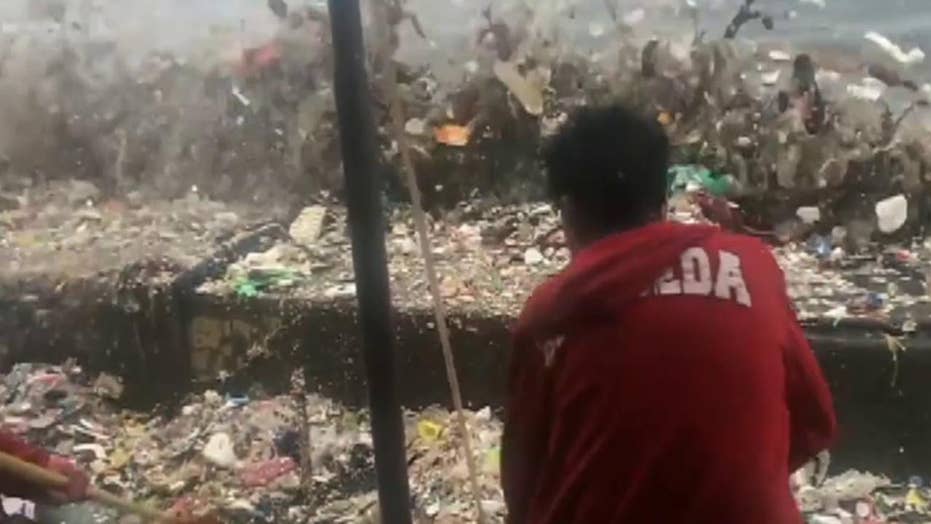 Volunteers in the Philippines try to clear the beach of trash washing in from the ocean.

Massive waves of swirling, disgusting garbage were captured on video by a college student in Manila Bay.

Piles of trash, plastic bottles and other unidentifiable refuse can be seen rippling and crashing ashore in video and images posted on social media.

Matthew Doming, a student affiliated with the Bedan Environmental Philosophers Organization, which was leading an effort to clean up the Philippines capital waterfront, recorded video of the trash-filled waves.

RED TIDE CRISIS: THE SCIENCE BEHIND THE TOXIC ALGAL BLOOM OFF FLORIDA'S COAST

Doming told Storyful it was the group’s first time witnessing the extent of garbage pollution in the area.

Waves of garbage are seen in the Philippines' Manila Bay. (Matt Doming/Facebook)

“It was such a horrible scene but instead of being dismayed, they were motivated to serve in line with the mission of our club, despite the discomfort,” he said.

Piles of garbage and all kinds of plastic debris have washed up on roads and side streets in Manila following a deluge of rain over the weekend.

According to a report from Ocean Conservancy, five Asian countries—China, Indonesia, Philippines, Thailand and Vietnam—are dumping more plastic into the oceans than the rest of the world combined.

Residents in some areas have reportedly been pitching in to recover lost valuables and useful material from the debris piles.