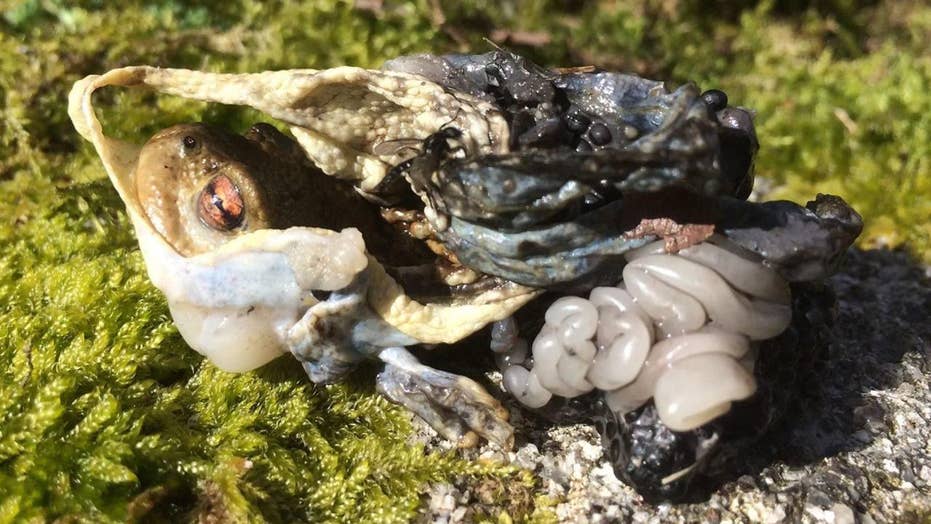 A disturbing and graphic image of a toad 'turned inside out' has popped up on Twitter, no doubt the work of a deadly predator.

A disturbing and graphic image of a toad "turned inside out" has popped up on Twitter, no doubt the work of a deadly predator.

Jan Freedman, a curator of natural history at a museum in Plymouth, England, was walking with his family when his 8-year-old son spotted the torn-up toad, according to Live Science.

"Sorry for the gross picture," Freedman wrote in his tweet. "This was a toad - but it was turned inside out. I’ve never seen anything like it before - the result of some kind of predator?"

'WORST DISEASE EVER RECORDED' IS RESPONSIBLE FOR 'FROG APOCALYPSE'

Speaking to the news outlet, Freedman said he was able to identify the mangled remains as a common toad because the "head was the only part that wasn't turned inside out."

"We have seen plenty of toads in our garden and at other spots on Dartmoor, but nothing like this," he continued.

After posing the question of what could have done this to the poor amphibian, responses rolled in. Some suggested crows, others suggested herons, but it "appears it was the work of an otter," Freedman tweeted.

European otters have been known to stripping the toads of their skin, according to Amy Schwartz, a researcher and doctoral candidate with the School of Biosciences at Cardiff University in the U.K., who spoke with Live Science.

Otters, who eat primarily fish, have been known to eat toads in the spring. Schwartz suspected the dastardly deed may have been the work of an otter after seeing a number of toad skins floating in a pond in Pembrokeshire.