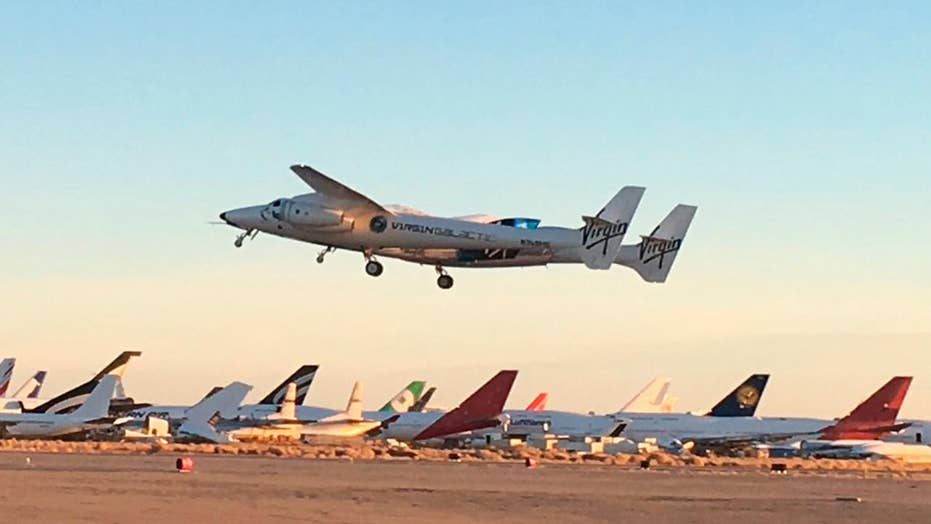 A test flight of Virgin Galactic's SpaceShipTwo is scheduled to launch from the Mojave Air and Space Port, north of Los Angeles.

The mated jet and rocket ship lifted off from Mojave Air and Space Port shortly after 10 a.m. EST. With two test pilots at the controls, the spacecraft quickly hurtled upward and out of sight from viewers on the ground.

Carrier aircraft WhiteKnightTwo released SpaceShipTwo shortly after reaching an altitude of 43,000 feet. After detaching from WhiteKnightTwo, the spaceplane fired its rocket motor and soon reached Mach 2.9. The rocket burnt for 60 seconds before being shut down, leaving the craft to coast to the top of its climb, reaching an altitude of 51.38 miles. SpaceShipTwo reached space at 11:02 a.m. EST.

The company considers an altitude of 50 miles to be the boundary of space. On Wednesday, Virgin Galactic CEO George Whitesides said that's the standard used by the U.S. Air Force and other U.S. agencies.

That differs from a long-held view that places the boundary at 62 miles. But Whitesides cited new research that favors the lower altitude and said that as a U.S. company it will use the U.S. standard.

After reaching space, SpaceShipTwo began a descent slowed and stabilized by a unique "feathering" technology that temporarily rotates its twin tails upward to increase drag. The plane returned to a normal flying configuration before gliding to land on the Mojave Air and Space Port runway.

SpaceShipTwo was safely back on the ground at 11:15 a.m. EST.

The test represents a major step toward the long-delayed dream of commercial space tourism.

Virgin Galactic tweeted that SpaceShipTwo carried NASA payloads during the test, putting the spacecraft close to an approximate commercial weight

Reaching the edge of space represents a major milestone for Richard Branson’s Virgin Galactic. The test demonstrates significant progress toward the start of commercial flights that were promised more than a decade ago. Virgin Galactic's development of its spaceship took far longer than expected and endured a setback when the first experimental craft broke apart during a 2014 test flight, killing the co-pilot.

The company plans to eventually take paying passengers on short trips to space. “What we witnessed today is more compelling evidence that commercial space is set to become one of the twenty-first century’s defining industries," said Whitesides, in a statement. "Reusable vehicles built and operated by private companies are about to transform our business and personal lives in ways which are as yet hard to imagine."

“Today, for the first time in history, a crewed spaceship, built to carry private passengers, reached space," said Virgin Galactic founder Richard Branson, in the statement. "Today we completed our first revenue generating flight and our pilots earned their Commercial Astronaut Wings. Today, we have shown that Virgin Galactic really can open space to change the world for good."

Fox News’ Christopher Carbone and The Associated Press contributed to this article.