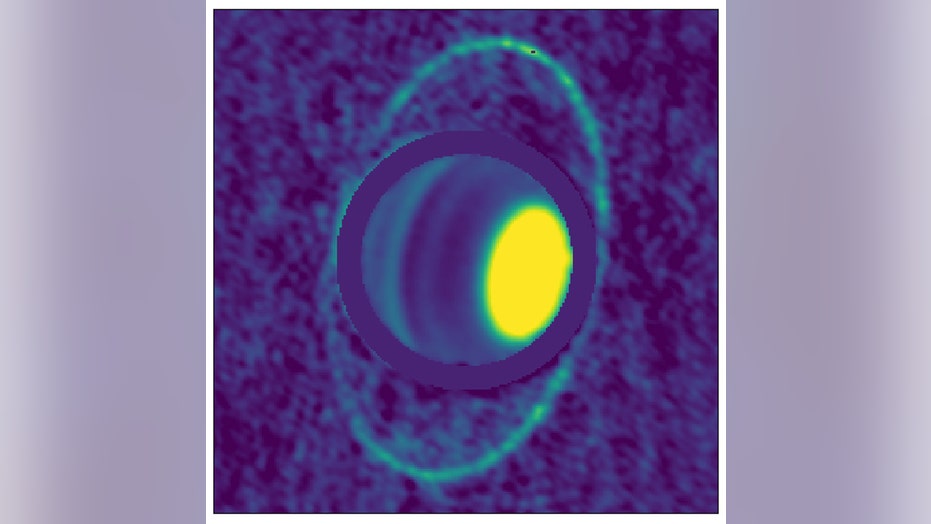 Astronomers have uncovered that Uranus' rings have a "warm" glow to them, a trait that's befuddling them.

The images, released by the University of California Berkeley and taken by the Atacama Large Millimeter/submillimeter Array (ALMA) and the Very Large Telescope (VLT), show the lack of dust-sized particles in the rings, aiding their ability to reflect light, making them unlike the rings that other planets have, such as Saturn or Jupiter.

“Saturn’s mainly icy rings are broad, bright and have a range of particle sizes, from micron-sized dust in the innermost D ring, to tens of meters in size in the main rings,” said Berkeley professor Imke de Pater in a statement. “The small end is missing in the main rings of Uranus; the brightest ring, epsilon, is composed of golf ball-sized and larger rocks.”

Composite image of Uranus’s atmosphere and rings at radio wavelengths, taken with the ALMA array in December 2017. The image shows thermal emission, or heat, from the rings of Uranus for the first time, enabling scientists to determine their temperature: a frigid 77 Kelvin (-320 F). Dark bands in Uranus’s atmosphere at these wavelengths show the presence of molecules that absorb radio waves, in particular, hydrogen sulfide gas. Bright regions like the north polar spot (yellow spot at right, because Uranus is tipped on its side) contain very few of these molecules. (Credit: Edward Molter and Imke de Pater)

“We already know that the epsilon ring is a bit weird, because we don’t see the smaller stuff,” Berkeley graduate student Edward Molter added in the statement. “Something has been sweeping the smaller stuff out, or it’s all glomming together. We just don’t know. This is a step toward understanding their composition and whether all of the rings came from the same source material, or are different for each ring.”

In addition to capturing the images, the VLT also let scientists measure the rings' temperature, coming in at a bone-chilling -320 degrees Fahrenheit.

The pre-published research is available to read on the arXiv website.