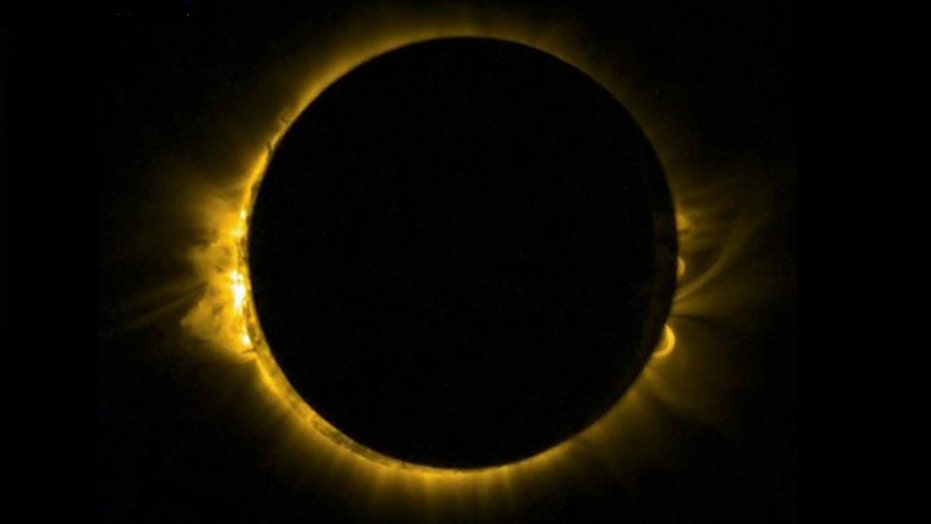 Friday was a huge day for skywatchers, offering a rare trifecta of celestial events – a total solar eclipse, a supermoon, and the vernal equinox.

The remote Norwegian archipelago of Svalbard offered some of the best views of the eclipse, which took place early on Friday and was not visible from the U.S.

People shouted, cheered and applauded as Longyearbyen, the main town in Svalbard, plunged into darkness. The skies above the arctic archipelago were clear, offering a full view of the sun's corona — a faint ring of rays surrounding the moon — that is only visible during a total solar eclipse.

A solar eclipse happens when the moon lines up between the sun and the Earth. This casts a lunar shadow on the Earth's surface and obscures the sun. During a partial eclipse, only part of the sun is blotted out.

Though some enterprising eclipse-seekers got exactly what they were hoping for, others were less lucky. A blanket of clouds in the Faeroe Islands in the North Atlantic blocked thousands of people from experiencing the full effect of the total eclipse.

The Faeroes and Svalbard were the only two places on land where the eclipse was total. About 20,000 visitors had traveled to the two remote island groups to watch the spectacle.

Despite the clouds in the Faeroes, tourists and residents in Torshavn alike hooted and applauded as the daylight dimmed for about 2 minutes and 45 seconds.

"It was a pretty big disappointment not to be able to see the sun," said Janaki Lund Jensen, who had sailed from Copenhagen with 884 others to see the eclipse. Hotel rooms have been booked for years as thousands came to the Faeroe Islands to try to see the eclipse.

Sigrun Skalagard, in the northern parts of the Faeroes, said birds there went silent and dogs started howling.

"Some people were surprised to see how fast it became dark," she said.

The European Space Agency’s Proba-2 minisatellite, which watches the sun, had a stunning ringside seat for the eclipse, and used its SWAP (Sun Watcher using Active Pixel System detector and Image Processing) imager to capture the moon passing in front of the sun.

A partial solar eclipse could be seen Friday across Europe and parts of Asia and Africa. Britain's Met Office said 95 percent of the sun was covered in the Hebrides, Orkneys and Shetland Islands, and one percent less further south in Glasgow and Edinburgh.

In Copenhagen, the sun was 85 percent covered up while 80 percent was hidden in southern Sweden. Cloudy weather put a lid across large parts of the continent, making it hard to see the eclipse. However, a thin cloud cover allowed people in Stockholm to watch the eclipse without protective glasses, as the faint disk of the sun could be seen through the overcast sky.

The last total eclipse was in November 2012 over Australia. The next one will be over Indonesia in March 2016, according to NASA. The next U.S. total solar eclipse will be in August 2017.

Skywatchers got another treat later on Friday with the occurrence of a supermoon. The supermoon, which makes the moon appear much larger, is either a full moon or a new moon that occurs during the moon's closest approach to Earth on its elliptical orbit, according to Accuweather.com. The lunar disk can appear around 15 percent larger during a full supermoon, it said.

Friday’s third major celestial event was the vernal equinox, marking winter’s astronomical end in the northern hemisphere. Equinoxes happen twice a year, in March and September, with the sun at its zenith, casting its most direct rays on the equator.