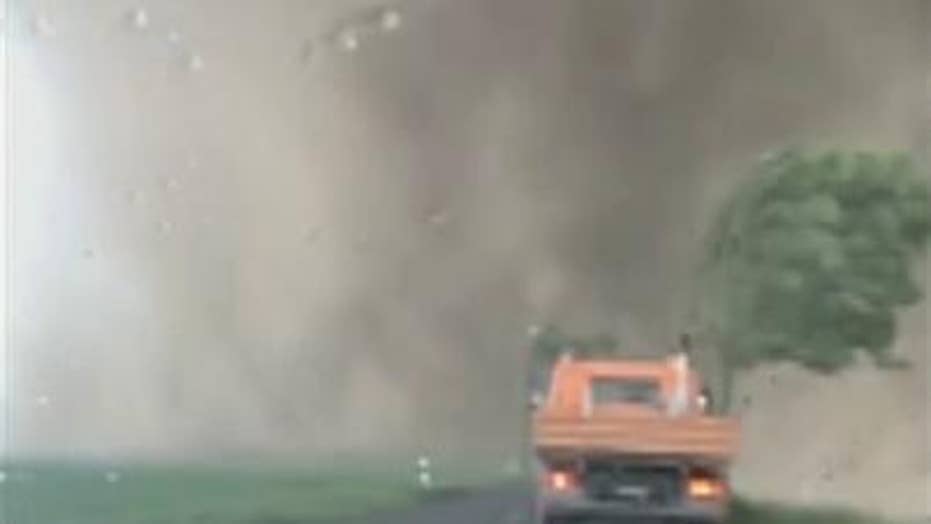 Motorists come dangerously close to a funnel cloud when a powerful storm ripped through the Lower Rhine region of Germany.

Motorists unexpectedly drove straight into the path of a raging tornado in Germany last week — and the terrifying incident was captured on video.

A video that has been circulating online shows two cars driving down a tree-lined road in Schwalmtal, Germany, when suddenly a tornado appears. Trees are nearly blown over by the powerful winds, which kick up dirt and other debris.

The vehicles parked just ahead of the tornado, which slowly inched closer. The tornado then "swallowed" the cars with darkness.

Meteorologist Anton Seimon told National Geographic the tornado was likely winding down by the time the motorists reached it, estimating winds were about 74 miles per hour at the time. The drivers did the right thing by slowing down and keeping their distance, he added.

If you find yourself trapped by a tornado at its highest intensity, however, Seimon recommends ditching the car and finding a safe space.

'TORNADO ALLEY' AND OTHER THINGS TO KNOW DURING TORNADO SEASON

“Abandoning the vehicle and lying face down in the lowest place possible, such as a drainage ditch, is [recommended] over trying to ride out the tornado within the vehicle,” Seimon told the publication, explaining that tornadoes can be powerful enough to pick up vehicles.

A tornado is a column of “rapidly rotating air that comes from a powerful, towering thunderstorm” also known as a supercell, Janice Dean, Fox News’ Senior Meteorologist, explained ahead of tornado season.