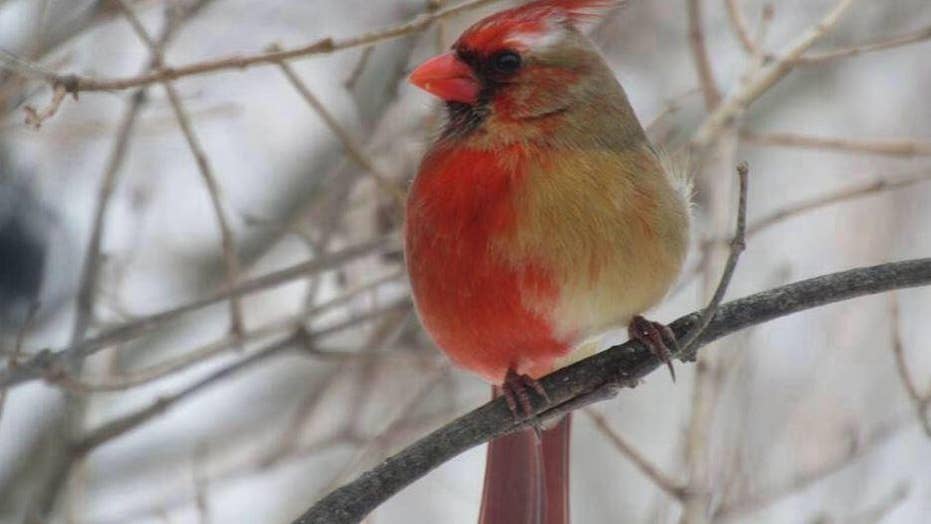 Half male, half female bird spotted

A cardinal has been spotted with plumed in feathers that are scarlet on one side and taupe on the other. The unusual plumage pattern is a telltale sign that this bird is a gynandromorph, or half male, half female.

Divided down the middle like a winged black-and-white-cookie, the rare cardinal is plumed in feathers that are scarlet on its right side and taupe on its left. When Shirley Caldwell photographed the bird on a recent winter morning, she knew it was unusually beautiful. She did not realize the bird's quirks went beyond its unusual plumage, though.

Ornithologists call birds like this one "bilateral gynandromorphs " — meaning half the bird's body is male and the other half is female. [Image Gallery: Stunning Dual-Sex Animals]

"This remarkable bird is a genuine male/female chimera," Daniel Hooper, a postdoctoral fellow at the Cornell Lab of Ornithology, told National Geographic.

Gynandromorphs, or "half-siders," exist in many bird, crustacean and butterfly species. According to Hooper, cardinal half-siders are especially easy to spot because male and female birds of the species display such clearly contrasting colors.

So, how does a bird end up being dual-coated and dual-gendered?

It involves a cocktail of chromosomes, which work slightly differently than the X and Y sex chromosomes that mammals carry.

According to Hooper, female birds carry both sex chromosomes — which in birds are labeled W and Z — while males carry two Zs. Gynandromorphy is thought to occur when female egg cells develop with two nuclei — so that one nucleus contains a single Z chromosome and the other contains a single W.

When that egg is fertilized by sperm carrying two male Z chromosomes, the egg develops with both ZZ (male) and ZW (female) chromosomes. The bird then develops with half of its body containing male ZZ cells while the other half contains female ZW cells.

If this chromosomal mix-up occurs early on in the animal’s development, before many of their cells begin to divide, it can result in the sort of perfect bilateral split seen in Caldwell’s cardinal friend. According to Kimberly Reece, a geneticist at the Virginia Institute of Marine Science, bilateral symmetry "typically arises when the organism has between 8 and 64 cells," Reece said in 2005, following the discovery of a gynandromorph crab in the Chesapeake Bay.

This is likely the case for the half-sider cardinal spotted in Pennsylvania, Hooper said. To know for sure, however, an ornithologist would have to analyze the bird's blood.

If that's the case, the chimeric bird's brain would probably also be "half male" and "half female," Hooper told The New York Times. As such, it's unlikely that the bird would be able to sing — a skill only developed by lusty male cardinals.

Shirley Caldwell has noticed one such scarlet-plumed male trying to court the gynandromorph bird in her yard. If there is a chemistry between the two lovebirds, it's possible they could even have offspring, Hooper said.

"Most gynandromorph individuals are infertile, but this one may actually be fertile as the left side is female, and only the left ovary in birds is functional," Hooper told National Geographic.