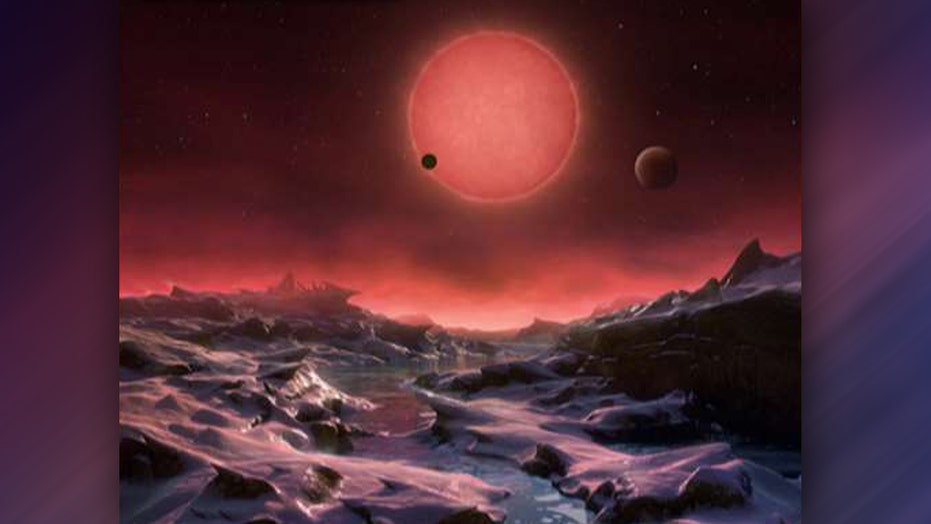 Trio of Earth-like planets may be prime spot for life

Three potentially habitable Earth-size planets have been discovered orbiting a dim, cold nearby star that is barely larger than Jupiter, researchers say.

"These kinds of tiny, cold stars may be the places we should first look for life elsewhere in the universe, because they may be the only places where we can detect life on distant Earth-sized planets with our current technology," study lead author Michaël Gillon, an astronomer at the University of Liège in Belgium, told Space.com.

Astronomers focused on a star originally named 2MASS J23062928-0502285 that was discovered using TRAPPIST (TRAnsiting Planets and PlanetesImals Small Telescope), a telescope in Chile. This dim cold red star, now known as TRAPPIST-1, is located in the constellation of Aquarius about 39 light-years from Earth. In comparison, Alpha Centauri, the nearest star system, is about 4.3 light-years from Earth. [Watch: See how the 3 TRAPPIST-1 Planets Might Support Life]

TRAPPIST-1 is 2,000 times less bright than the sun, a bit less than half as warm as the sun, about one-twelfth the sun's mass, and less than one-eighth the sun's width, making it only slightly larger in diameter than Jupiter. TRAPPIST-1 is a type of star known as an ultracool dwarf that is very common in the Milky Way, making up about 15 percent of the stars near the sun.

Scientists spotted the three planets by observing TRAPPIST-1 dimming at regular intervals as the worlds crossed in front of it. This is the first time that distant planets, called exoplanets, have been found around an ultracool dwarf, the researchers said.

"So far, the existence of such 'red worlds' orbiting ultracool dwarf stars was purely theoretical, but now we have not just one lonely planet around such a faint red star, but a complete system of three planets," study co-author Emmanuël Jehin, an astronomer at the University of Liège, said in a statement.

These three planets are each only about 10 percent larger in diameter than Earth. "The kind of planets we've found are very exciting from the perspective of searching for life in the universe beyond Earth," study co-author Adam Burgasser at the University of California, San Diego, said in a statement.

The two innermost planets are about 60 to 90 times closer to their star than the Earth to the sun, with orbits only 1.5 and 2.4 days long, respectively. The orbit of the third planet is currently less certain, ranging between 4.5 and 73 days long. The small size of the star and its planets' orbits means "the structure of this planetary system is much more similar in scale to the system of Jupiter's moons than to that of the solar system," Gillon said in the statement.

Although all three planets orbit very near their star, the inner two planets receive only four times and two times, respectively, the amount of radiation that Earth receives, since their star is much fainter than the sun. The third outer planet probably receives less radiation than Earth does, the researchers said.

The third of TRAPPIST-1's planets, the one farthest from the star, may lie within the star's habitable zone — the area around a star where planets have surfaces warm enough to have liquid water, a key ingredient to life as it is known on Earth. The two planets closest to TRAPPIST-1 may have daysides that are too hot and nightsides that are too cold to host any kind of life as it is known on Earth, but the researchers suggest that the borders of the planets' day- and nightsides may be sweet spots temperate enough for life.

For the most part, exoplanet-hunting missions have focused on finding systems around sun-like stars emitting visible light, but these stars can be so bright, they can drown out key features of their planets, the researchers said. In contrast, cold dwarf stars emit mostly infrared light, and are so faint they would not overwhelm details of their planets. TRAPPIST was designed to look for planets around 60 nearby ultracool dwarfs. [7 Ways to Discover Alien Planets]

"The detection of these planets [around TRAPPIST-1] should intensify the search for more systems around ultracool dwarfs," Gillon said. "Exciting scientific adventures are now beginning."

Since the planets around TRAPPIST-1 are relatively nearby, scientists can in principle analyze the compositions of their atmospheres, "and further down the road, which is within our generation, assess if they are actually inhabited," study co-author Julien de Wit, a planetary scientist at Massachusetts Institute of Technology, said in a statement. "All of these things are achievable, and within reach now. This is a jackpot for the field."

The masses of these worlds remain unknown, but future research can pinpoint how much each of these planets gravitationally pulls at its siblings when they get close to each other, Gillon said. The strength of each planet's gravitational pull will help scientists deduce its mass, which in turn will help them estimate the planets' densities and, thus, compositions, he added.

"We can tell if the planets are probably rocky, or rich in ice like the moons of Jupiter, or rich in metal like Mercury," Gillon said.

The researchers noted that the Hubble Space Telescope and the forthcoming James Webb Space Telescope could help analyze the atmospheres of those planets for molecules linked with life, such as water, carbon dioxide and ozone.

"Now we have to investigate if they're habitable," de Wit said in the statement.

The scientists detailed their findings online May 2 in the journal Nature.