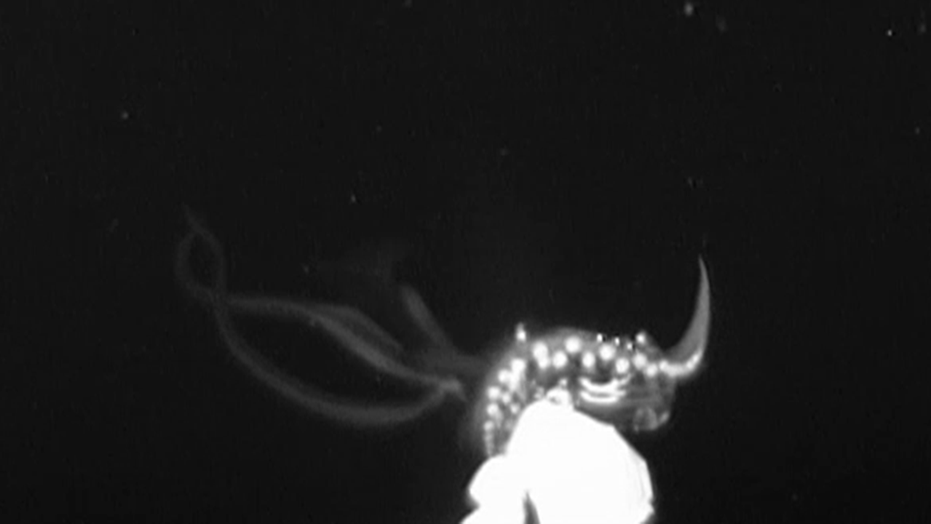 A giant squid has been caught on camera in U.S. waters for the first time ever by researchers who were looking for creatures living in the "midnight zone" of the sea.

The squid was found 2500 feet below the surface in complete darkness and can be seen attacking a probe, which was being used to draw any creatures towards the camera.

The scientists, who are part of the National Oceanic and Atmospheric Administration’s (NOAA) Journey into Midnight project, were using a specialized camera system called the Medusa.

This technology uses red light that is undetectable to sea creatures but allows the pitch black ocean to be illuminated enough for researchers to spot elusive animals and discover new ones.

The Medusa probe has a fake jellyfish attached to it, which mimicked the luminescent defense mechanism of a jellyfish and alerted creatures like the giant squid that a meal might be nearby.

Rare footage like this excited the researchers but they had to rush back to shore to find a squid expert who could confirm they were looking at a giant squid.

After battling through a lightning strike and a storm, zoologist Michael Vecchione was able to confirm remotely that the footage was indeed of a giant squid about 10 to 12 feet long.

Edith Widder, one of the leaders of the expedition, said: "It's got eight writhing arms and two slashing tentacles. It has the largest eye of any animal we know of, it's got a beak that can rip flesh.

"It has a jet propulsion system that can go backwards and forwards, blue blood, and three hearts.

"It's an amazing, amazing life form we know almost nothing about."

Filming a giant squid is notoriously difficult and it hasn't been done since the first time a squid was caught on camera in its natural habitat in 2012.

This discovery occurred in the deep sea near Japan and involved some of the same scientists using the Medusa probe.