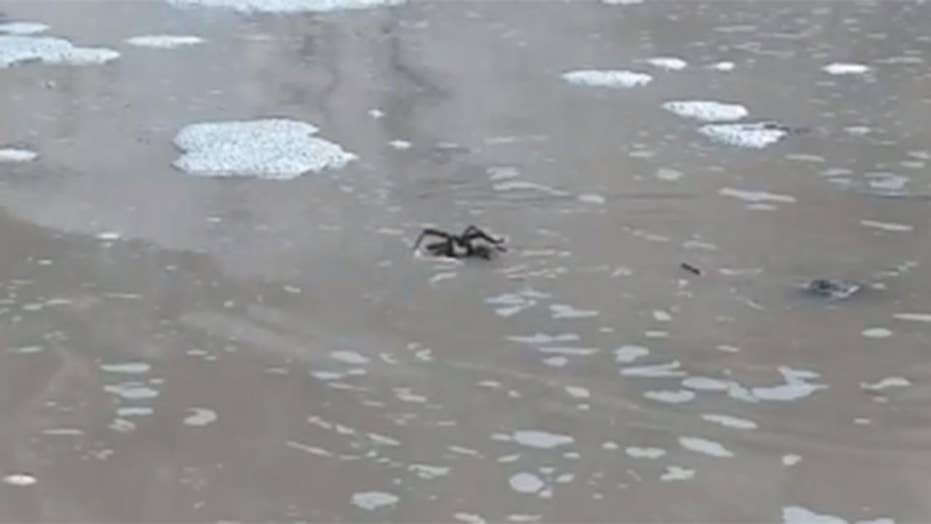 Tarantula spotted swimming in pool of water at Texas park

In an odd and fascinating sighting, officials with the Big Bend Ranch State Park in Texas captured an eight-legged creature “swimming” across a small body of water: a tarantula.

“Did you know that tarantulas can ‘swim?’ With their legs acting as paddles, they can row across water,” the park captioned a Wednesday Facebook video, which already has more than 3,000 shares and 270,000 views.

While the video doesn’t show if the hastily moving spider made it across successfully, the Big Bend Ranch State Park confirmed that it did, explaining the tarantula used the “current to help drift to the shore”

“That is terrifyingly cool,” one woman commented on the video.

“They really are quite magnificent and gentle. Don’t kill it; leave it alone and it will leave you alone,” another woman wrote.

The tarantula made it across the body of water, park officials said. (Big Bend Ranch State Park - Texas Parks and Wildlife)

“This is way on the top of the list of spider nightmares!!!” a third added.

These arachnids typically only take to water when forced, such as being chased or falling in. Tarantulas are likely able to detect they’re in water through hygroreceptors on their legs, which can also detect humidity, according to a researcher with the University of Manchester in the United Kingdom.

Studying the way these creatures react when placed in water, the researcher found most tarantulas float "on the surface film of water,” noting “a layer of air trapped by the dense coat of hairs on the legs and body” was an important factor.

"The waterproofing ability of the spider cuticle, with its waxy outermost layer, was impressively demonstrated and the tarantulas emerged completely dry from the water, none the worse for their ordeal,” the researcher added.