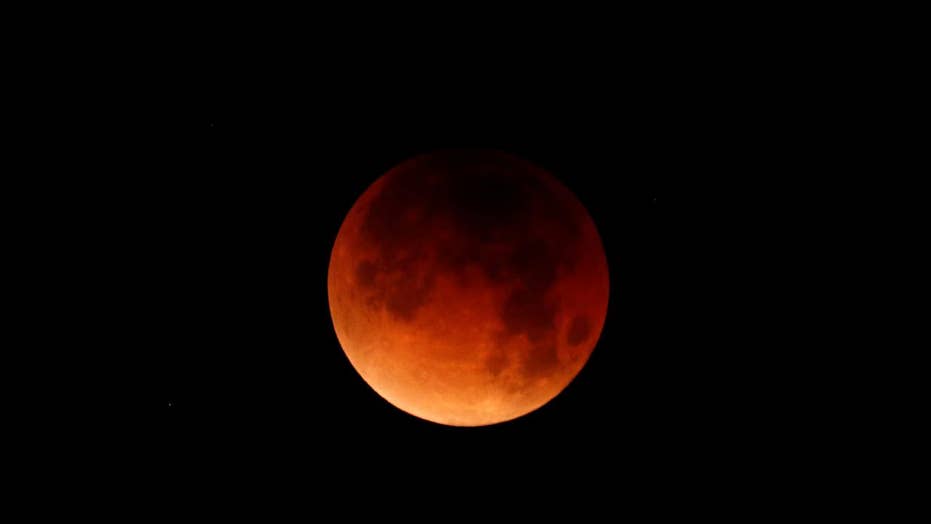 Super Blue Blood Moon: Best images from around the world

A rare celestial phenomenon took place on January 31st 2018, a super blue blood moon, which is when a blue moon and a total lunar eclipse take place at the same time. Check out these images of the historic sight from around the world.

Skywatchers were treated to the extremely rare phenomenon of a super blue blood moon early Wednesday.

The unusual lunar trifecta occured for the first time in North America since 1866, according to Space.com.

SUPER BLUE BLOOD MOON 2018: WHAT, WHEN AND WHERE

“The Jan. 31 full moon is special for three reasons: it’s the third in a series of ‘supermoons,’ when the Moon is closer to Earth in its orbit -- known as perigee -- and about 14 percent brighter than usual,” explains NASA. “It’s also the second full moon of the month, commonly known as a ‘blue moon.’ The super blue moon will pass through Earth’s shadow to give viewers in the right location a total lunar eclipse. While the Moon is in the Earth’s shadow it will take on a reddish tint, known as a ‘blood moon.’

“For the (continental) U.S., the viewing will be best in the West,” explained Gordon Johnston, program executive and lunar blogger at NASA Headquarters in Washington, in a statement.

Across the globe, skywatchers were closely monitoring the moon to see the rare event.

People set up telescopes on the waterfront for the super blue moon and eclipse in Hong Kong, China Jan. 31, 2018. (REUTERS/Bobby Yip)

Photographers have also been capturing the phenomenon on camera.

The Statue of Liberty is backdropped by a supermoon, Wednesday, Jan. 31, 2018, seen from the Brooklyn borough of New York. The supermoon, which is the final of three consecutive supermoons, also experience lunar eclipse as it set over the horizon, but only a partial eclipse was visible in the East Coast. (AP Photo/Julio Cortez)

Only a partial eclipse, however, was visible in the East Coast of the U.S.

The Statue of Liberty is backdropped by a supermoon, Wednesday, Jan. 31, 2018, seen from the Brooklyn borough of New York. (AP Photo/Julio Cortez)

Hawaii and Alaska had the best seats in North America, along with the Canadian Yukon.

While the super blue blood moon was visible in the pre-dawn hours in much of the U.S., other parts of the world viewed the lunar event in the middle of the night.

A full moon is seen during a lunar eclipse in Jakarta, Indonesia Jan. 31, 2018. (REUTERS/Darren Whiteside)

The event was particularly visible in Australia and Asia.

The lunar spectactle has been generating plenty of buzz on social media, with #SuperBlueBloodMoon a topic trending global topic on Twitter.

Some Twitter users, however, were underwhelmed by the spectacle.