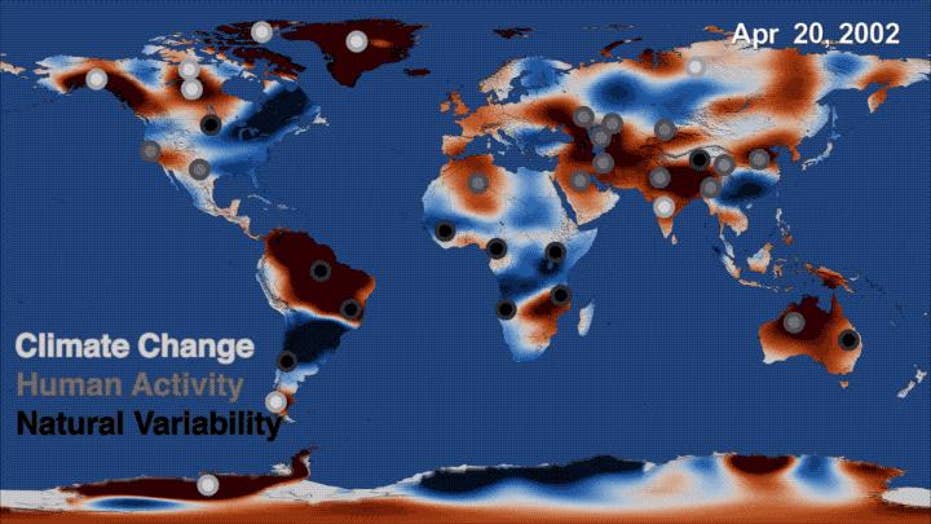 A new NASA study shows that humans are responsible for major changes to Earth’s water availability.

A stunning new study from NASA highlights the impact humans are having on fresh water availability across the globe.

The study, published earlier this week, found that Earth's wetlands are getting wetter and dry regions are getting drier, due to human water management, climate change and natural cycles.

"What we are witnessing is major hydrologic change," said co-author Jay Famiglietti, of NASA's Jet Propulsion Laboratory (JPL) in Pasadena, Calif., in a statement.

"We see a distinctive pattern of the wetland areas of the world getting wetter – those are the high latitudes and the tropics – and the dry areas in between getting dryer. Embedded within the dry areas we see multiple hotspots resulting from groundwater depletion."

NORTHEAST STORMS WERE POWERFUL ENOUGH TO GENERATE 'METEOTSUNAMI' ALONG COAST

A team of researchers led by NASA's Matt Rodell trekked across the globe, looking at trends in 34 regions and using 14 years worth of data.

They pulled in satellite precipitation data from the Global Precipitation Climatology Project, NASA/U.S. Geological Survey Landsat imagery, irrigation maps, and published reports of human activities related to agriculture, mining and reservoir operations, according to the statement.

The study was published in the scientific journal Nature.

Rodell noted in the statement this is the first time they've been able to see that freshwater availability is changing on the planet.

In the study's abstract, the authors noted that the trends had been lacking the proper investigation and attribution, including in areas in northwest China and and Okavango Delta.

"This observation-based assessment of how the world’s water landscape is responding to human impacts and climate variations provides a blueprint for evaluating and predicting emerging threats to water and food security," the abstract reads.

Rodell added that a key goal of the study was to determine what shifts were caused by natural occurrences, including wet and dry periods on the planet, associated with El Niño and La Niña, and those caused by humans, including tasks such as "pumping groundwater out of an aquifer faster than it is replenished."

WHAT IF THE OCEAN'S CLIMATE-CONTROLLING 'CONVEY BELT' CAME TO A HALT?

Freshwater is defined as water found in lakes, rivers, soil, snow, groundwater and ice. The shifting of availability of freshwater from ice is especially noteworthy, given the loss from ice sheets at both the North and South Poles has implications for sea levels rising.

Famiglietti said that while the melting of ice and alpine glaciers is clearly caused by climate change, there is more work to do to see why the other changes in freshwater availability are occurring.

"The pattern of wet-getting-wetter, dry-getting-drier during the rest of the 21st century is predicted by the Intergovernmental Panel on Climate Change models, but we’ll need a much longer dataset to be able to definitively say whether climate change is responsible for the emergence of any similar pattern in the GRACE data," he added.

It's uncertain at this point whether it's possible to reverse the effects of climate change, though scientists and researchers are certainly trying.

GREENLAND IS LITERALLY CRACKING APART AND FLOODING THE WORLD

Earlier this week, a team of geneticists laid out plans to comingle the permafrost-preserved DNA of a Woolly Mammoth with that of an Asian elephant to increase the elephant's tolerance to cold weather.

Cities are also taking up the task of trying to combat climate change.

In Los Angeles, for example, officials are painting streets white to reduce the effect of urban "heat islands" and combat the effects of climate change.