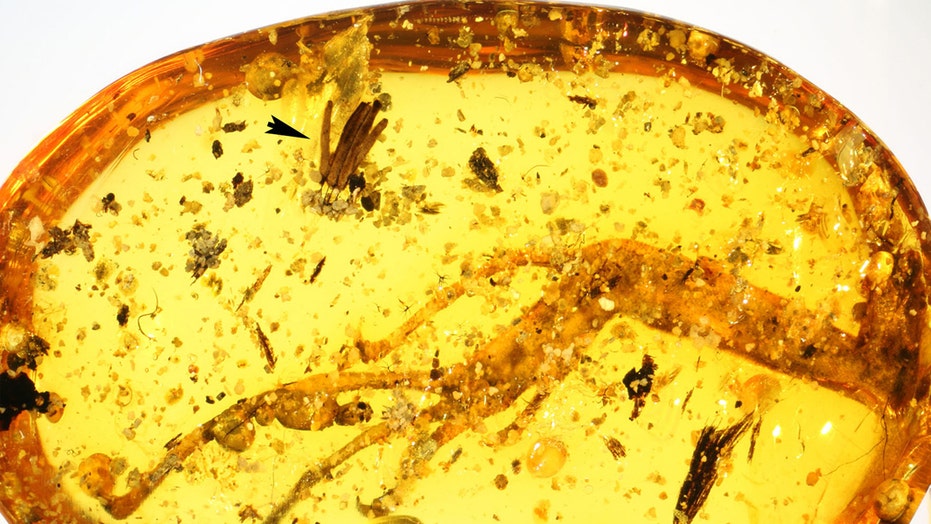 Researchers have discovered a 100-million-year-old slime mold and a lizard leg perfectly preserved in amber from a tree in Myanmar, a find described as "unique."

Also known as myxomycetes, these tiny slime molds are single-celled organisms that largely live in soil or rotting wood, feasting on bacteria. Occasionally, they can join together "to form complex, beautiful and delicate fruiting bodies, which serve to make and spread spores," according to the press release.

Finding fossilized versions of these slime molds is extremely rare, with only two confirmed reports of fruiting bodies found prior, both of which are between 35 million and 40 million years old.

"The fragile fruiting bodies were most likely torn from the tree bark by a lizard, which was also caught in the sticky tree resin, and finally embedded in it together with the reptile," said one of the study's authors, Jouko Rikkinen, in the statement.

It's possible that the lizard detached the fruiting bodies from the myxomycetes at an early stage, unlocking information for the researchers to study.

"The fossil provides unique insights into the longevity of the ecological adaptations of myxomycetes," paleontologist Alexander Schmidt added.

Group of several fruiting bodies of a slime mould (myxomycetes), around 2.5 millimetres long, in amber, which is about 100 million years old, from Myanmar: long-stalked fruiting bodies support the distribution of the spores, then as now. (Credit: Alexander Schmidt, University of Göttingen and Scientific Reports)

The study has been published in the journal Scientific Reports.

In 2018, the fossilized remains of a 99-million-year old beetle were also discovered in Myanmar.