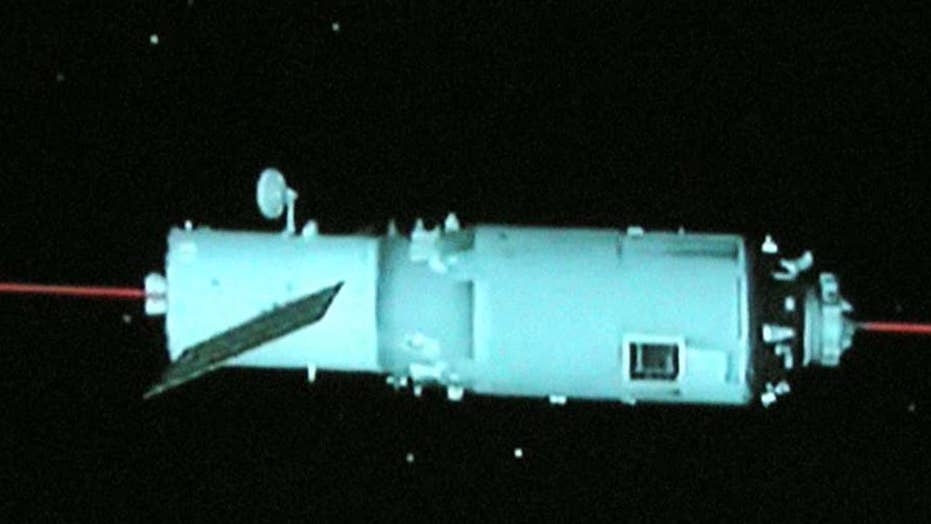 A representative for China's space agency says most of the abandoned 8.5-ton Tiangong-1 should burn up in the atmosphere, but large sections could still hit the ground.

An out of control Chinese space station could smash into a major world city at the beginning of 2018.

The European Space Agency said the 8.5-tonne Tiangong-1, or “Heavenly Palace”, satellite could hit "any spot" between two latitude lines in the northern and southern hemispheres.

ESA experts said the 12-metre long craft would crash into Earth's atmosphere at some point between January and March 2018.

The UK should be safe, according to ESA's calculations, but New York, Los Angeles, Beijing, Rome, Istanbul and Tokyo are among major cities that could be at risk - although the potential impact area is so large that residents shouldn't be too worried about impending death from above.

Holger Krag, head of ESA’s Space Debris Office, said: "“Owing to the geometry of the station’s orbit, we can already exclude the possibility that any fragments will fall over any spot further north than 43ºN or further south than 43ºS.

“This means that re-entry may take place over any spot on Earth between these latitudes, which includes several European countries, for example.”

Although it's hoped the craft will burn up in the atmosphere, ESA said "some portions of it will survive and reach the surface".

However, it was quick to stress that no human has been killed by space debris throughout the history of spaceflight

Jonathan McDowell,  a Harvard University astrophysicist, previously warned there was no way of telling exactly where the space station was going to plunge to Earth.

“You really can’t steer these things,” he said last year.

“Even a couple of days before it re-enters we probably won’t know better than six or seven hours, plus or minus, when it’s going to come down."

The station will reduce significantly in size as the Earth's atmosphere burns it up.

However, large chunks of metal could still fall to Earth and injure or kill anyone present at the impact site.

McDowell added: "There will be lumps of about 100kg or so, still enough to give you a nasty wallop if it hits you."

Chinese space chiefs are less concerned about the risk posed by their space station.

A spokesperson for China's space agency said: "Based on our calculation and analysis, most parts of the space lab will burn up during falling."

China is pouring billions into its space programme and working to catch up with the US and Europe."

Beijing regards its military-run space programme as a symbol of the country's progress and a mark of its rising global stature.

As well as building a space station, it intends to eventually put one of its citizens on the surface of the moon.

In April, China vowed to send a craft to orbit Mars, land and deploy a rover to explore the surface by 2020.