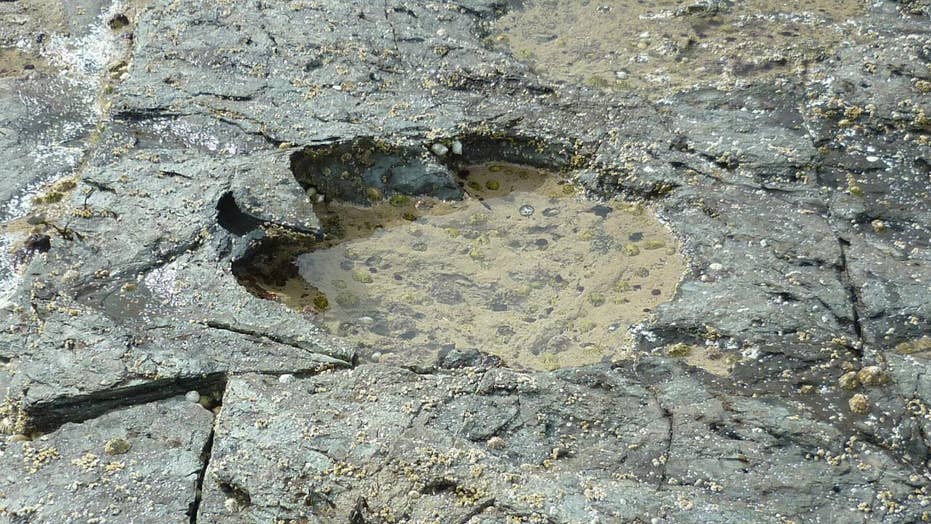 The footprints of three-toed meat-eating dinosaurs that date back to 170 million years ago have been found on the coast of Scotland.

Scientists are trumpeting a globally important find with the discovery of dozens of rare giant dinosaur footprints in Scotland from 170 million years ago.

Left by 6-foot-tall sauropods and similarly-sized theropods in a muddy, shallow lagoon on the Isle of Skye, the footprints are evidence of the Middle of Jurassic period, from which few fossil sites have been found around the world, the University of Edinburgh announced Tuesday.

“The more we look on the Isle of Skye, the more dinosaur footprints we find,” said Edinburgh scientist Steve Brusatte.

“This new site records two different types of dinosaurs — long-necked cousins of Brontosaurus and sharp-toothed cousins of T. rex — hanging around a shallow lagoon, back when Scotland was much warmer and dinosaurs were beginning their march to global dominance,” he said.

Brusatte’s field team of researchers discovered about 50 footprints at Brother’s Point, a headland on the island’s Trotternish peninsula.

One track left by a sauropod was more than 27 inches wide.

The footprints were difficult to study owing to tidal conditions, the impact of weathering and changes to the landscape, the university said in a news release.

The site was mapped and photographed using drones.

"This tracksite is the second discovery of sauropod footprints on Skye,” said Paige dePolo, who led the study team. “It was found in rocks that were slightly older than those previously found at Duntulm on the island and demonstrates the presence of sauropods in this part of the world through a longer timescale than previously known."

A series of rare dinosaur footprints discovered on the Isle of Skye, including this one made by a 6-foot-tall theropod, is helping experts establish details of an important period in dinosaur evolution. (Paige dePolo/Edinburgh University)

She added: "This site is a useful building block for us to continue fleshing out a picture of what dinosaurs were like on Skye in the Middle Jurassic."

The first set of sauropod footprints were found on Skye in 2015.

The Staffin Museum on the Isle of Skye and Chinese Academy of Sciences also participated in the study which was published in the Scottish Journal of Geology.