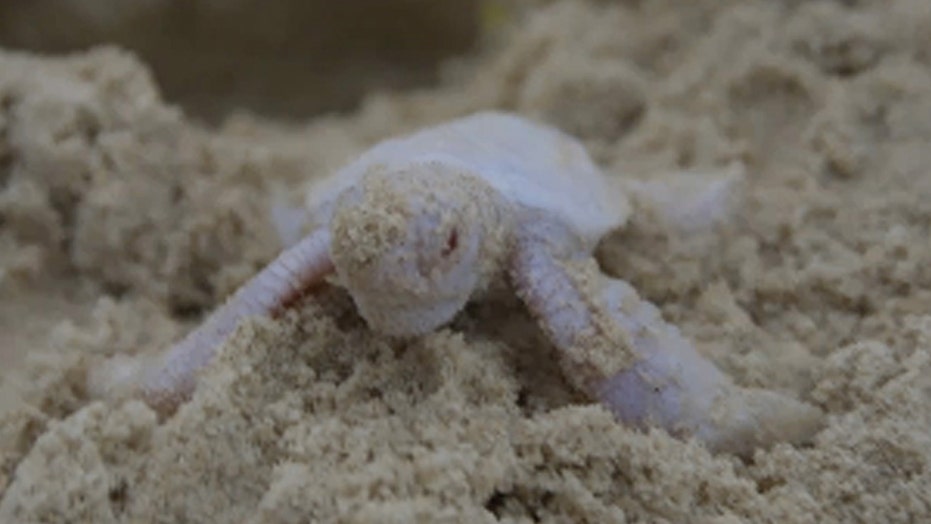 A group of Australians got a rare treat earlier this week, when a baby albino turtle emerged from a nest and successfully made its way down to the Coral Sea.

A 1-in-10,000 occurrence, the turtle has become an international superstar with video of its first moments on Earth Sunday on Australia’s Castaways Beach in Noosa, Queensland going viral. The video shot Sunday showed the turtle scrambling out of its nest, pausing occasionally to catch its breath and slowly making its way down to the water – dodging a few blades of grass along the way. It then disappeared into the waves.

“Surprise, awe and captivated. We were happy that it was so full of vigor- and keen to get to the water,” Leigh Warneminde, president of the Coolum & North Shore Coast Care conservation group who was on hand to the see the birth of the turtle, told FoxNews.com.

Warneminde said the group, of mostly volunteers which monitors the nesting sites on this and other beaches, took plenty of photos, measurements of the rare turtle and then “let it go on its journey down the beach to the sea.”

Green turtles, listed as endangered by the International Union for Conservation of Nature and found throughout tropical waters and to some degree sub-tropical waters, face a range of threats on the Castaways Beach from foxes and crabs. In other parts of Australia, they also are favorite snake of wild dogs, feral pigs and many birds.

By one count, only one in 1,000 green turtles survives to adulthood – and the chances may be even slimmer for Alby.

Related: 183-year-old giant tortoise gets new lease on life thanks to healthier diet

“Alby, being white, may also have issues with sun and may be less camouflaged so could be at greater risk of predation,” Warmeminde said.

Australian conservationists including the Noosa Community Biosphere Association said they are hopeful that the emergence of Alby will draw greater attention to marine turtles and the ecosystems they call home, especially in the Noosa Biosphere. It is a UNESCO-designated site in Queensland that aims strike a balance between people and nature through education, conservation and sustainable activities