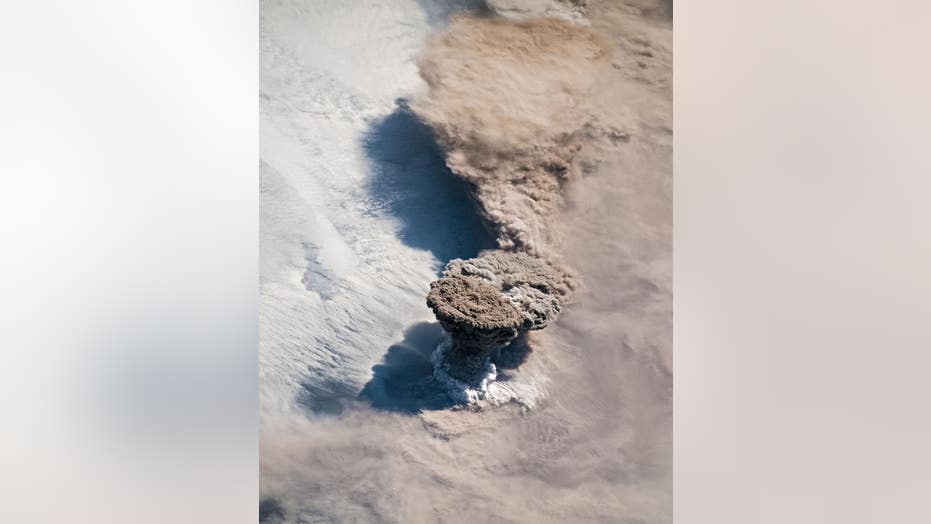 The powerful eruption of the Raikoke volcano was captured by astronauts on the International Space Station on Saturday.

The amazing image, which shows a huge plume of smoke rising up and surrounded by white clouds, was released by NASA Earth Observatory.

Several satellites, along with astronauts on the ISS, saw the thick plume rise and eventually stream east as it was pulled into a storm's circulation.

The volcano sits on an uninhabited island in the Kuril Islands chain in the northwest Pacific Ocean.

This NASA Earth Observatory image by Joshua Stevens shows the eruption of the Raikoke volcano. (NASA)

The ring of clouds at the base of the plume appears to be water vapor, according to the space agency.

Scientists said the ash could have reached an altitude of 8 to 10 miles.

“What a spectacular image. It reminds me of the classic Sarychev Peak astronaut photograph of an eruption in the Kuriles from about ten years ago,” Simon Carn, a volcanologist at Michigan Tech, said in a statement.

This image released by NASA shows the location of the Raikoke volcano. (NASA)

“The ring of white puffy clouds at the base of the column might be a sign of ambient air being drawn into the column and the condensation of water vapor. Or it could be a rising plume from interaction between magma and seawater because Raikoke is a small island and flows likely entered the water," Carn added.