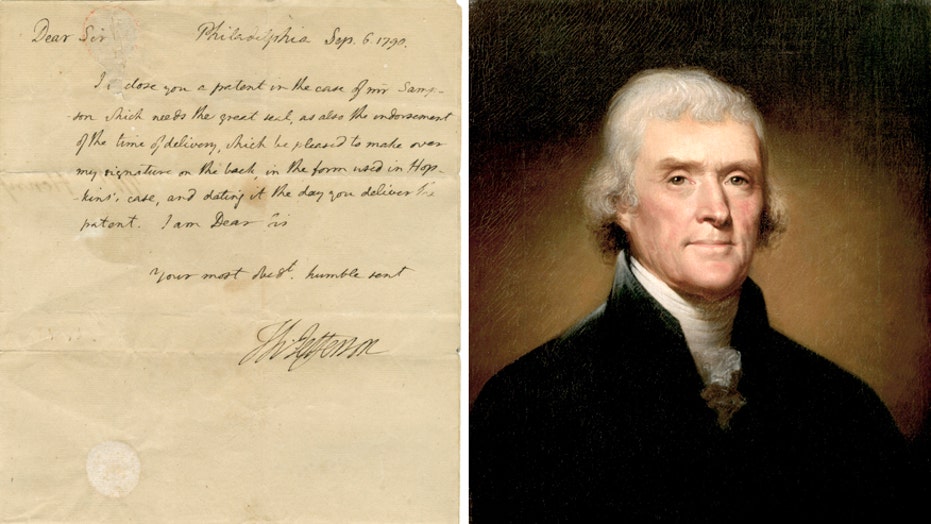 A previously unknown letter by Thomas Jefferson has surfaced, offering a glimpse into the Founding Father’s desire to drive innovation.

The letter was written in September 1790 when Jefferson was secretary of state and part of a three-person board to assess new inventions. Written to his chief aide, the letter mentions the first two inventions “blessed and patented by the new U.S. government,” according to the Raab Collection, which is selling the letter.

The inventions were, respectively, related to the manufacture of potash and candles. Valued at $50,000, the letter has been in the private collection for nearly a century, where it was stored in the basement of an East Coast family home, according to the rare documents dealer.

The letter was written by Thomas Jefferson while he was serving as Secretary of State. (Raab Collection)

The announcement of the Jefferson letter coincides with the launch of the book “The Hunt for History,” by Raab Collection President Nathan Raab.

“This discovery highlights how the hunt continues every day and why I wanted to write this book,” he said, in a blog post. “It also shows us that the founders understood the importance of protecting innovation and invention and how they did it. I have never seen another such letter of Jefferson, let alone one that is new to scholars. I continue to be inspired by the hard work and vision of the men and women who came before us.”

Earlier this year the Raab Collection revealed documents that were recovered from the drowned body of a patriot pastor that shed light on the fight for religious freedom during the Revolutionary War.