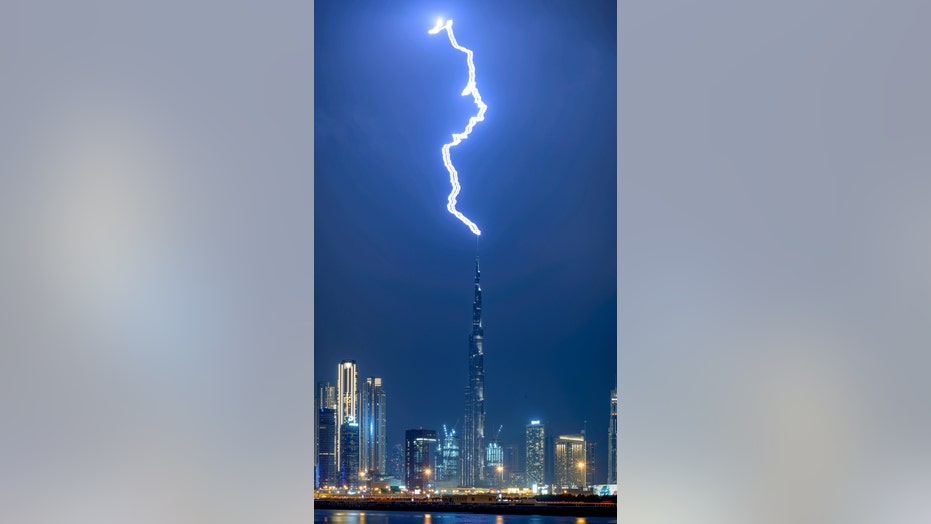 A photographer has captured a remarkable image of lightning striking the world's tallest building, the 2,717-foot Burj Khalifa in Dubai, three times in a row.

Zohaib Anjum, 33, took the incredible image during a period of high winds in Dubai, British news agency SWNS reports. "It literally happens in a split second, you blink and you miss it," Anjum told the news outlet. "You can't see it with your eyes, you need to see it in slow motion."

"It's definitely a once in a lifetime photo to get the shot of it hitting the building," he added.

Three lightning bolts appear to hit the Burj Khalifa simultaneously in what may be the clearest picture ever taken of the phenomena known as 'Ribbon lightning'. (Credit: SWNS)

The rare phenomena, known as "Ribbon lightning," occurs when the "wind blows the lightning channel sideways during the exposure," according to Storm Highway, a blog focused on storm chasing. "The stronger the wind and closer the lightning strike, the more horizontal displacement will exist on the recorded image."

Anjum said he had been trying to take the remarkable photo for seven years but had failed, noting storms of this magnitude are rare in the area.

"We don't have many storms in Dubai we'll have rain and storms maybe about once a year," he continued. "That night we knew that a storm was coming to Dubai, a serious storm so I went out to this location from 8 p.m. until 6 a.m. the next morning. The storm kept coming and going so I set up my camera on a time lapse. This time I went I got five shots of the lightning hitting the top of the highest building in Dubai."

Storm chasing is a dangerous albeit burgeoning industry, meaning Anjum has to take extreme precautions to protect himself, hiding under a bridge during the storm.

Storm chaser Zohaib Anjum snapped the extraordinary moment during high winds in Dubai. "Ribbon lightning" occurs when multiple return pulses of electricity in the same ionized channel are separated by the wind, even though they occur within tens of milliseconds of each other. (Credit: SWNS)

"You have to protect yourself and your camera because if water drops on your lens then you can't see it clearly, he added. "I was under a flyover on the ground with my camera positioned to look at the building. That way the lightning would hit the bridge before it hit me! It can be quite dangerous."

Lightning kills 30 people in the U.S. every year, according to John Jensenius (also known as Dr. Lightning) of the National Oceanic and Atmospheric Administration.