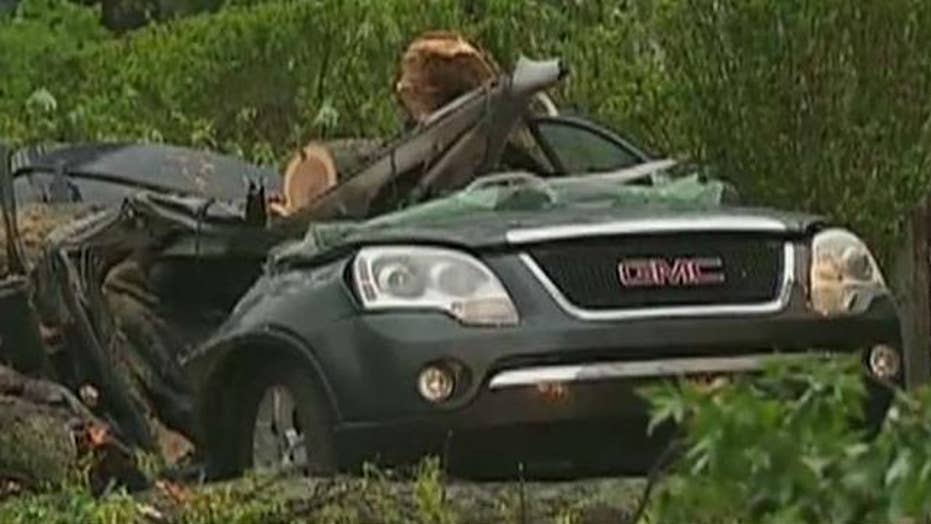 Strong winds knocked down trees causing power outages for hundreds of thousands of homes and businesses.

The powerful thunderstorms that that left a path of destruction and at least 3 dead across the Northeast on Tuesday were so strong they generated a small tsunami off the coast, according to forecasters.

The National Weather Service said the weather-generated tsunami, known as a meteotsnuami, resulted in fluctuating water levels for several hours and was picked up on buoys off stretching from New Jersey up to southern New England.

"This kind of tsunami is generated by abrupt changes of atmospheric pressure in the causative storm system, which is a line of thunderstorms that moved over the ocean in this case," the NWS said. "The combination of the air pressure effect on the ocean surface, and the speed at which the pressure disturbance travels, can generate abnormal waves in certain situations."

Data from buoys off the coast showed small fluctuations in water levels after 8 p.m., which lasted for several hours.

Most meteotsunamis are too small to notice, with water levels fluctuating by several inches or a foot above the normal tide, according to the weather agency.

While there was no damage reported from the event on Tuesday, the NWS says in an online factsheet that large meteotsunamis can have "devastating coastal impacts."

"Damaging waves, flooding, and strong currents can last from several hours to a day and can cause significant damage, injuries, and deaths," the NWS notes.

In this Tuesday, May 15, 2018 photo, storm clouds gather over New York city seen from the Hudson River. A line of strong storms pushed across New York City and generated a small tsunami off the coast. (AP Photo/Denis Paquin)

On June 13, 2013, despite clear skies and calm weather, three people were injured in New Jersey when a six-foot wave swept them off a jetty and into the water as a result of a reported meteotsnuami. In May 2012, a seven-foot wave in Lake Erie near Cleveland swept beachgoers off their feet and swamped boats in harbors, according to the NWS.

The weather agency said that conditions for destructive meteotsunamis are most favorable along the East Coast, Gulf of Mexico, and in the Great Lakes.