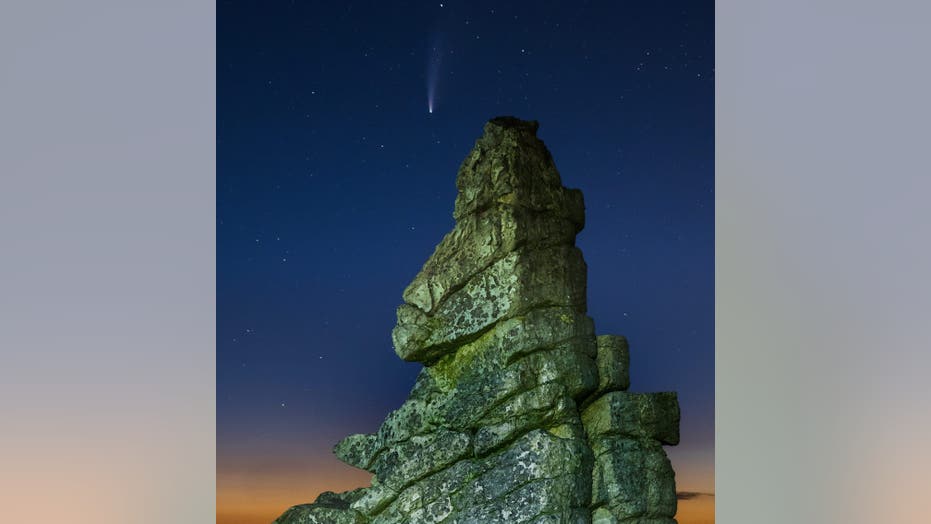 The NEOWISE comet was captured again on Monday, with this breathtaking image showing the celestial object flying over Manstone Rock in Shropshire, England.

"I thought it would make an interesting picture because there's some great symbolism," Fusek Peters told the news outlet. "Manstone Rock looks like a person's face. You can make out the face easily and it is looking at the comet. The idea of the face looking at the comet appealed to me."

The Neowise comet over Stiperstones National Nature Reserve, Shropshire. See SWNS copy SWMDcomet: Breathtaking photographs show the Neowise comet streaking across the night sky above an ancient ridge in the Shropshire Hills. Andrew Fusek Peters spent hours waiting for the right conditions to capture the rare cosmic event over one of the oldest rock formations on the planet. He arrived at the at Stiperstones National Nature Reserve at dusk on Monday (20/7) but ended up taking the photos at closer to midnight.

The Stiperstones, which formed nearly 480 million years ago, is also known for the Devil's Chair, the best-known point in the reserve.

Peters, 54, said he had seen other pictures of NEOWISE and wanted to do something a little different.

“It's all about putting the two together," Peters said of the comet and the rock formation. "Photographing the comet by itself that's rather dull really because once you've seen one you've seen them all. To get the comet and in context with the landscape I think is a bit more interesting and I am very happy with how they came out."

The comet, which can be observed with the naked eye, has been visible since July 7, NASA said on its website.

“The comet takes about 6,800 years to make one lap around its long, stretched out orbit, so it won't visit the inner solar system again for many thousands of years,” the agency explained on its website.

NASA notes that the comet’s closest approach to Earth will be on July 22, at a distance of about 64 million miles.