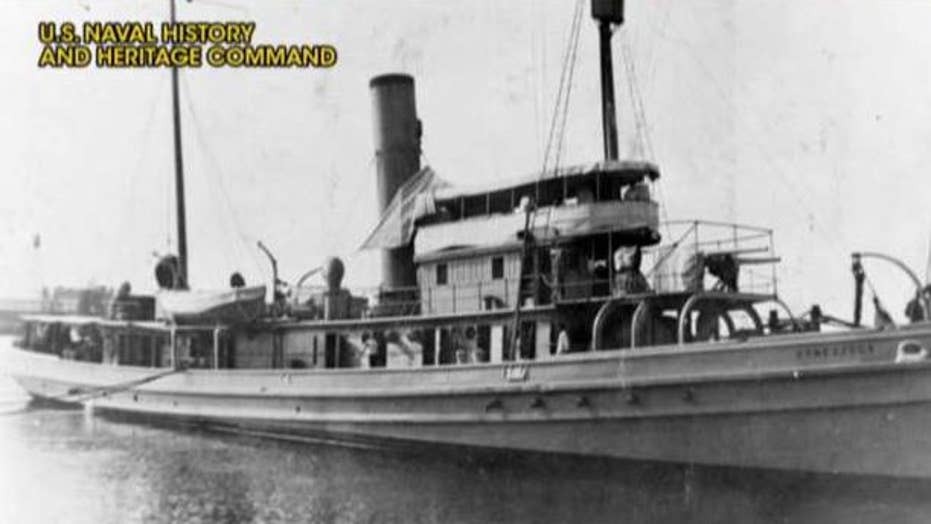 Nearly 100 years ago, a Navy tugboat with 56 officers and sailors aboard was heading from California to the American Samoa when it disappeared without a trace.

A massive air and sea search around the Hawaiian islands for the USS Conestoga turned up nothing and two months later, a battered lifeboat was spotted with the C on its bow off the Mexican coast. It was the last U.S. Navy ship to be lost without a trace in peacetime and became one of the top maritime mysteries in Navy history.

Now, that mystery has been solved.

The National Oceanic and Atmospheric Administration and the Navy announced Wednesday that they had found the Conestoga in the Greater Farallones National Marine Sanctuary off San Francisco – some 95 years after it disappeared.

“After nearly a century of ambiguity and a profound sense of loss, the Conestoga’s disappearance no longer is a mystery,” Manson Brown, assistant secretary of commerce for environmental observation and prediction and deputy NOAA administrator, said in a statement. “We hope that this discovery brings the families of its lost crew some measure of closure and we look forward to working with the Navy to protect this historic shipwreck and honor the crew who paid the ultimate price for their service to the country.”

The officers and crew of USS Conestoga, in San Diego, California in 1921. Lost for 95 years, the tug was discovered in the Greater Farallones National Marine Sanctuary off San Francisco. (Naval Historical Center Photograph NH 71503)

The first breakthrough came in 2009 when the NOAA Office of Coast Survey, as part of a hydrographic survey near the Farallon Islands off San Francisco, spotted a possible, uncharted shipwreck. Five years later, they confirmed it was indeed the Conestoga.

Modern painting of the USS Conestoga (AT 54) on its final voyage pounding through large waves during a gale off Southeast Farallon Island in March 1921. (Artist Danijel Frka © Russ Matthews Col)

“Thanks to modern science and to cooperation between agencies, the fate of Conestoga is no longer a mystery,” Dennis McGinn, the assistant secretary of the Navy for Energy, Installations and Environment, said. “In remembering the loss of the Conestoga, we pay tribute to her crew and their families, and remember that, even in peacetime, the sea is an unforgiving environment.”

Originally built to tow coal barges for the railroad, the Navy purchased Conestoga in 1917 for World War I service. The tug operated on the Atlantic coast and off the Azores, performing convoy and other duties before being assigned to harbor service in Norfolk, Virginia, in 1919.

Ordered to duty in American Samoa, Conestoga steamed from Mare Island Naval Shipyard in California at 3:25 p.m. on March 25, 1921, headed for Pearl Harbor. After leaving the Golden Gate, the tug, possibly towing a barge, disappeared.

While the cause of the disaster remains unresolved, weather appears to be a critical factor.

Weather logs around the time of Conestoga’s departure indicated that wind in the Golden Gate area almost doubled to 40 miles per hour, and the seas were rough. A garbled radio transmission from Conestoga relayed later by another ship stated the tug was “battling a storm and that the barge she was towing had been torn adrift by heavy seas.”

Based on the location and orientation of the wreck in 189-foot-deep water, NOAA believes Conestoga sank as officers and crew attempted to reach a protected cove on the island.

“This would have been a desperate act, as the approach is difficult and the area was the setting for five shipwrecks between 1858 and 1907,” according to NOAA’s report on the Conestoga discovery. “However, as Conestoga was in trouble and filling with water, it seemingly was the only choice to make.”

Video, from cameras mounted on remotely operated vehicles used to explore the wreck site, shows the wreck lying on the seabed and largely intact. The size of the wreck and many of its features - the four-bladed, 12-foot 3-inch diameter propeller; the steam engine and boilers a large steam towing winch with twisted wire on the drum; two porcelain marine heads; and a single, 3-inch, 50-caliber gun that was mounted on the main deck in front of the pilot house – helped NOAA confirm this was the Conestoga.

No human remains, however, were discovered at the site.