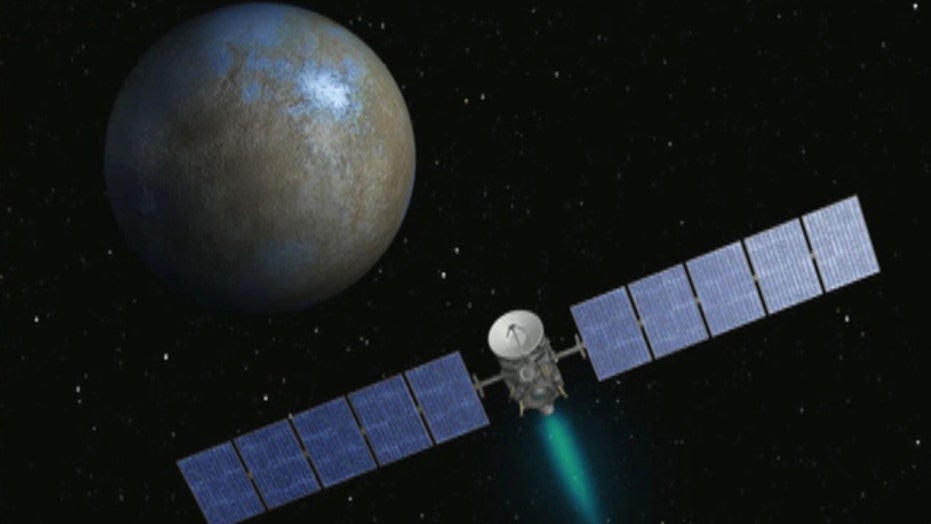 Ceres, which lies between Mars and Jupiter, is 310 million miles from Earth.

Mission controllers at NASA’s Jet Propulsion Laboratory in Pasadena, Calif., which is managing the mission, received a signal from Dawn at 8:36 a.m ET, showing that the spacecraft was healthy and thrusting with its ion engine. The engine thrust was a key indicator that Dawn had entered Ceres’ orbit as planned.

"We feel exhilarated," said Chris Russell, principal investigator of the Dawn mission at the University of California, Los Angeles (UCLA), in a statement. "We have much to do over the next year and a half, but we are now on station with ample reserves, and a robust plan to obtain our science objectives."

Launched in September 2007, Dawn has travelled 3.1 billion miles to reach Ceres. The spacecraft explored the giant asteroid Vesta for 14 months in 2011 and 2012, and began its final approach to Ceres in December. The Dawn mission is scheduled to end in June 2016, at which time the spacecraft will remain in Ceres’ orbit.

Scientists hope that NASA’s investigation of Ceres will boost our understanding of how the solar system formed.

Images of Ceres have already revealed craters and unusual bright spots that scientists believe tell how Ceres formed and whether its surface is changing. NASA says that as Dawn spirals into closer and closer orbits around the planet, researchers will be looking for signs that these features are changing, which would suggest current geological activity.

Since Jan. 25, Dawn has been delivering the highest-resolution images of Ceres ever captured, and they will continue to improve in quality as the spacecraft approaches, according to NASA.

The most recent images received from Dawn were taken on March 1 and show Ceres as a crescent, largely in shadow because the spacecraft's trajectory put it on a side of Ceres that faces away from the sun until mid-April, according to NASA. When Dawn emerges from Ceres' dark side, NASA expects the spacecraft to deliver ever-sharper images as it spirals to lower orbits around the planet

The dwarf planet has an average diameter of 590 miles and is the largest body in the main asteroid belt and is believed to contain a large amount of ice. Ceres is estimated to be 25 percent water by mass.

Sicilian astronomer Father Giuseppe Piazzi spotted Ceres in 1801 and was the first object discovered in our solar system’s asteroid belt.

Initially classified as a planet, Ceres was later called an asteroid, and designated a dwarf planet in 2006.

A host of organizations are involved in the Dawn mission. UCLA, for example, is handling overall mission science, while the German Aerospace Center, the Max Planck Institute for Solar System Research, the Italian Space Agency, and the Italian National Astrophysical Institute are involved as international partners.

The Dawn spacecraft was built by Dulles, Va.-based Orbital ATK.