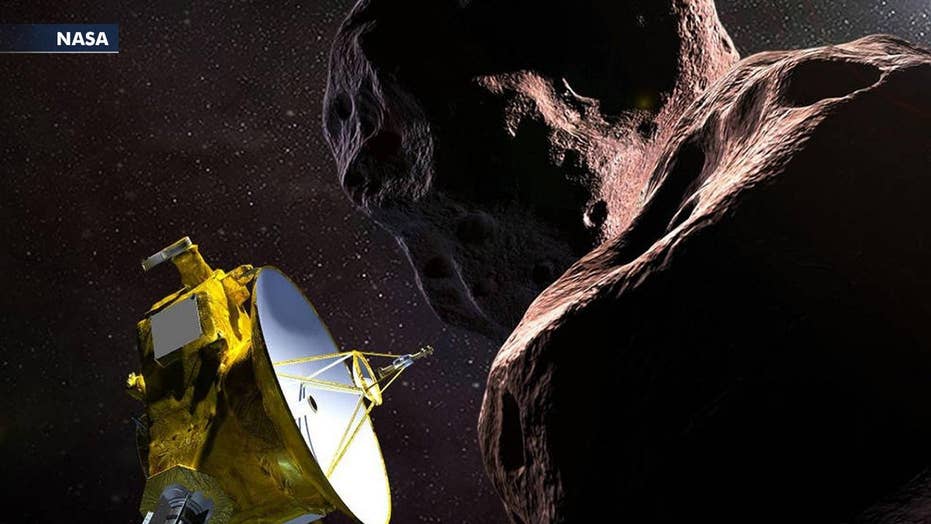 NASA's New Horizons probe completes flyby of Ultima Thule, the most distant object ever visited by a spacecraft

Scientists believe that objects like Ultima located in the Kuiper belt, a band of frozen material that orbits the Sun far beyond even the dwarf planet Pluto, hold clues to the formation conditions of the Solar System 4.6 billion years ago.

NASA's New Horizons spacecraft has made a trek to the far reaches of our solar system, zooming past icy Ultima Thule at 32,000 miles per hour in the early hours of New Year's Day.

"New Horizons holds a dear place in our hearts as an intrepid and persistent little explorer, as well as a great photographer," said Johns Hopkins Applied Physics Laboratory Director Ralph Semmel in a statement. "This flyby marks a first for all of us — APL, NASA, the nation and the world — and it is a great credit to the bold team of scientists and engineers who brought us to this point."

New Horizons zipped past Ultima Thule more than three years after its brush with Pluto.

FILE - This composite image made available by NASA shows the Kuiper Belt object nicknamed "Ultima Thule," indicated by the crosshairs at center, with stars surrounding it on Aug. 16, 2018, made by the New Horizons spacecraft. (NASA/Johns Hopkins University Applied Physics Laboratory/Southwest Research Institute via AP)

According to NASA, images captured during the spacecraft's approach, which brought New Horizons to within just 2,200 miles of Ultima at 12:33 a.m. EST, revealed that the Kuiper Belt object may have a shape similar to a bowling pin, spinning end over end, with dimensions of approximately 20 by 10 miles. Another possibility is Ultima could be two objects orbiting each other.

Ultima is in what's termed the Kuiper belt, which is a band of frozen material that orbits the Sun far beyond even the dwarf planet Pluto. Scientists believe that objects like Ultima almost certainly hold clues to the formation conditions of the Solar System 4.6 billion years ago.

New Horizons acquired gigabytes of photos and other observations during the pass, however, because of the vast distance between the spacecraft and Earth, it will take until September 2020 to retrieve all of the data stored on the probe.

The celebration occurred in the midst of a partial government shutdown, which closed much of NASA's public outreach for the Ultima Thule flyby. But NASA and JHUAPL were able to stream live webcasts and photos of the flyby. Thomas Zurbuchen, NASA's associate administrator for science, even received special dispensation from NASA chief Jim Bridenstine to attend.

"I think it is fitting that this flyby of Ultima Thule is at the interface of the 60th anniversary of Explorer 1 [the first U.S. satellite] in 2018 and the 50th anniversary of Apollo 11 in 2019," Zurbuchen said in an email that Stern read aloud Monday, reports Space.com. "To me, this milestone for New Horizons is full of everything that NASA and NASA science is about."

FACEBOOK'S ZUCKERBERG SLAMMED FOR 'OUT OF TOUCH' YEAR-END POST

New Horizons' chief scientist Alan Stern told the BBC that Ultima presents researches with a rare opportunity to learn about the origins of the universe.

"Reaching Ultima Thule from 4 billion miles away is an incredible achievement. This is exploration at its finest," said Adam L. Hamilton, president and CEO of the Southwest Research Institute in San Antonio, in a statement. "Kudos to the science team and mission partners for starting the textbooks on Pluto and the Kuiper Belt. We're looking forward to seeing the next chapter."