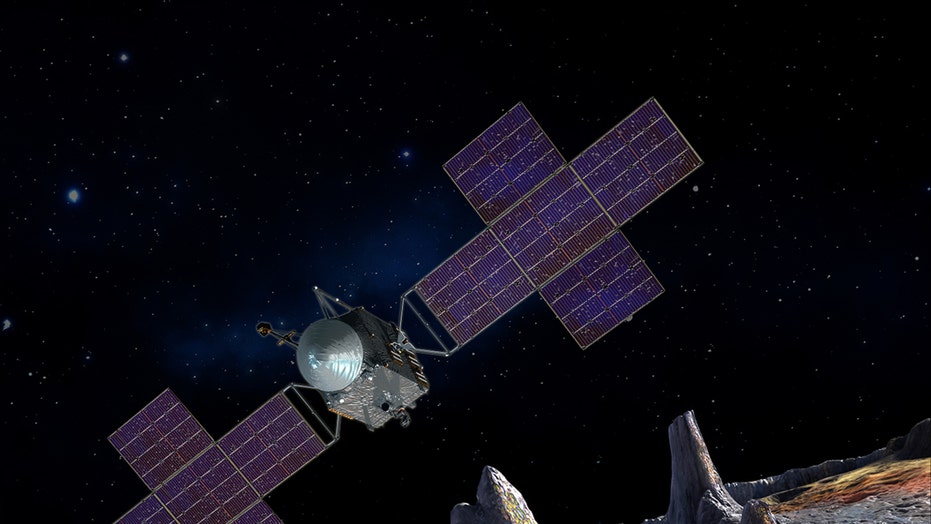 NASA is preparing for a mission that could see it visit a mysterious, dead planet in deep space.

Set for a target date of Jan. 31, 2026, the government space agency is preparing to send a spacecraft to the asteroid Pysche. Unlike most asteroids, which are largely comprised of rock and ice, researchers believe Pysche is made up of mostly iron and nickel, much like the Earth's core.

"They [scientists] wonder whether Psyche could be the nickel-iron heart, or exposed core, of an early planet maybe as large as Mars that lost its rocky outer layers through violent collisions billions of years ago," NASA wrote in a statement on its website. "If so, it would provide a unique look into the solar system's distant past, when the kind of high-speed protoplanet encounters that created Earth and the other terrestrial planets were common."

This artist's-concept illustration depicts the spacecraft of NASA's Psyche mission near the mission's target, the metal asteroid Psyche. The artwork was created in May 2017 to show the five-panel solar arrays planned for the spacecraft. (Credit: NASA/JPL-Caltech/Arizona State Univ./Space Systems Loral/Peter Rubin)

MYSTERIOUS LARGE MASS DISCOVERED ON MOON BEWILDERS SCIENTISTS: 'WHATEVER IT IS, WHEREVER IT CAME FROM'

Part of the asteroid belt, the 125-mile-wide Pysche orbits the Sun between Mars and Jupiter. It's believed Pysche weighs 49 billion billion pounds, making it 0.03 percent the size of our Moon, according to Live Science. That would make it the 11th largest known asteroid in the solar system.

The largest asteroid in the solar system is Ceres, which is one-quarter the size of the Moon; it's also considered the only dwarf planet in the inner solar system.

The mission is about to begin its Phase C, where the final design and fabrication are locked in, after an extensive review by NASA Headquarters.

"The Psyche team is not only elated that we have the go-ahead for Phase C, more importantly, we are ready," said Principal Investigator Lindy Elkins-Tanton in the statement. "With the transition into this new mission phase, we are one big step closer to uncovering the secrets of Psyche, a giant mysterious metallic asteroid, and that means the world to us."

Despite the excitement surrounding the mission, it still has to go through three more phases, including Phase D, which will start sometime in early 2021.