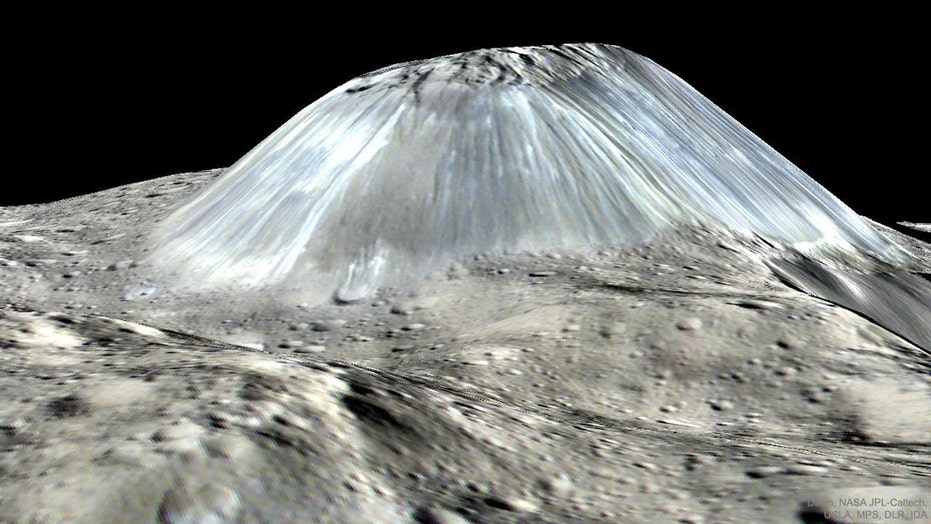 NASA unveiled a new image of the dwarf planet Ceres that "is like nothing that humanity has ever seen before."

"The new hypothesis, based on numerous gravity measurements, holds that a bubble of mud rose from deep within the dwarf planet and pushed through the icy surface at a weak point rich in reflective salt — and then froze," NASA said in a statement.

MYSTERIOUS LARGE MASS DISCOVERED ON MOON BEWILDERS SCIENTISTS: 'WHATEVER IT IS, WHEREVER IT CAME FROM'

"In this region, the interior of Ceres is not solid and rigid, but moving and at least partially fluid," Wladimir Neumann of the DLR Institute of Planetary Research in Berlin-Adlershof and the University of Münster, said in a statement. "This ‘bubble’ that formed in the mantle of Ceres beneath Ahuna Mons is a mixture of saline water and rock components."

The study has been published in the journal Nature Geoscience.

HUMANS ARE PROBABLY SAFE FROM A CATASTROPHIC ASTEROID STRIKE — FOR NOW

Ceres is the largest object in the asteroid belt between Mars and Jupiter and was first spotted by Giuseppe Piazzi in 1801. In 2015, it became the first dwarf planet to be visited by a spacecraft, NASA wrote in a separate description of Ceres.

The visualization was based on data from Dawn, which is still orbiting Ceres, but has run out of fuel and is effectively dead.

In 2017, Dawn found the building blocks for life on the dwarf planet, spotting organic molecules which appeared to form on Ceres and not from an asteroid or comet strike.