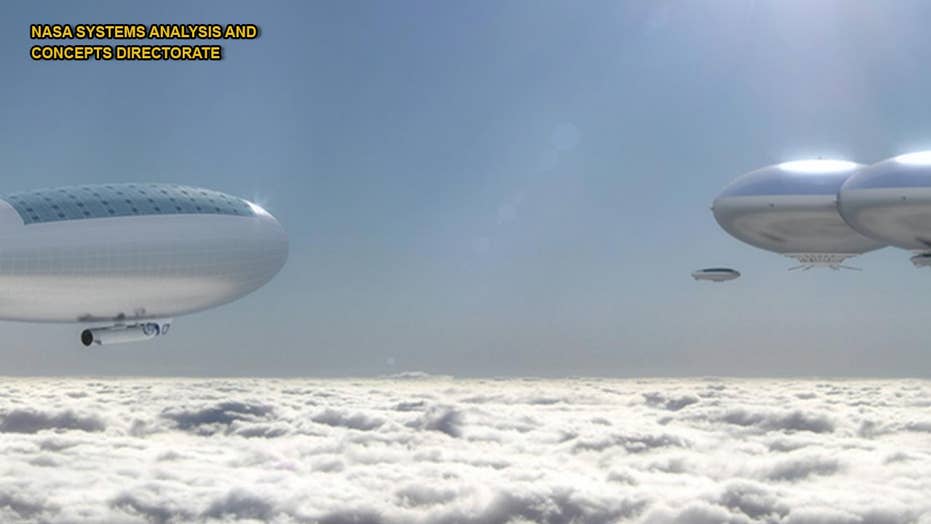 NASA is considering an airship-style vehicle concept for Venus exploration. They are eyeing designs that could support a 30-day crewed mission into Venus' atmosphere.

NASA is considering a spectacular airship concept for Venus exploration.

The space agency’s Systems Analysis and Concepts Directorate (SACD) has posted potential designs of the High Altitude Venus Operational Concept (HAVOC) on its website. The airships have even been compared to a “cloud city” by Space.com.

A similar size to Earth, Venus is our closest planetary neighbor. However, exploring Venus poses a unique set of challenges, according to NASA. “Though its internal geology is similar to Earth’s, its surface is hot enough to melt lead and is covered with craters, volcanoes, mountains, and lava plains,” it explains.

SHOULD WE LAND ON VENUS AGAIN? SCIENTISTS ARE TRYING TO DECIDE

Additionally, Venus’s atmosphere is mainly carbon dioxide and thick clouds of sulfuric acid cover the entire planet. “The atmosphere traps the small amount of energy from the sun that reaches the surface along with the heat the planet itself releases,” NASA explains. “This greenhouse effect has made the surface and lower atmosphere of Venus one of the hottest places in the solar system.”

Because Venus’s upper atmosphere has similar pressure, density, gravity, and radiation protection to Earth’s surface, NASA is considering an airship-style vehicle for exploring the planet. “A lighter-than-air vehicle could carry either a host of instruments and probes, or a habitat and ascent vehicle for a crew of two astronauts to explore Venus for up to a month,” it said. “Such a mission would require less time to complete than a crewed Mars mission.”

Set against this backdrop, NASA is eyeing vehicle concept designs that could support a 30-day crewed mission into Venus’s atmosphere. At this point, it is not clear when a manned mission would be sent to Venus.

NASA'S PARKER SOLAR PROBE GETS CLOSER TO 'TOUCHING THE SUN'

“Key technical challenges for the mission include performing the aerocapture maneuvers at Venus and Earth, inserting and inflating the airship at Venus, and protecting the solar panels and structure from the sulfuric acid in the atmosphere,” NASA said. “With advances in technology and further refinement of the concept, missions to the Venusian atmosphere can expand humanity’s future in space.”

In 2015, NASA’s Langley Research Center identified and evaluated candidate materials capable of withstanding the sulfuric acid in Venus’s atmosphere. FEP-Teflon (Fluorinated Ethylene Propylene-Teflon) performed well after 30 days of immersion in concentrated sulfuric acid, it said. The second proof of concept “developed and verified a packaging algorithm for the airship envelope to inform the entry, descent, and inflation analysis.”

More than 40 spacecraft have explored Venus, which is 162 million miles from Earth at the farthest point of its orbit. Japanese space agency JAXA’s Akatsuki spacecraft has been studying Venus since entering its orbit in 2015. NASA’s Magellan spacecraft entered the planet’s orbit in 1990, but radio contact with it was lost on Oct. 12, 1994.

Space.com recently reported that NASA and Russian space agency Roscosmos are partnering to discuss a lander that could survive the harsh conditions on Venus’s surface for months.

The HAVOC proof of concept has been compared to a "cloud city". (NASA Systems Analysis and Concepts Directorate)

Harnessing Venus’ gravity, Parker will complete seven flybys over seven years to gradually bring its orbit closer and closer to the Sun. On its closest approach in 2024 to the Sun, the probe will be traveling at approximately 430,000 mph, setting a new speed record for a manmade object.

NASA also has a goal of sending a manned mission to Mars in the 2030s.