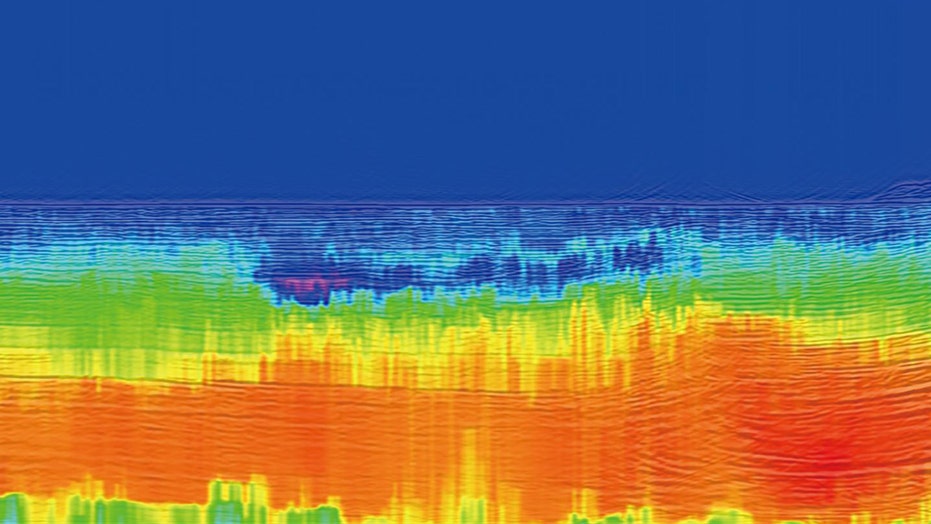 Researchers have discovered an enormous "pocket" of gas trapped underwater that could either be an enormous untapped natural resource or a potential "ticking time bomb" of greenhouse gas emissions.

The problem? Scientists don't know which it is just yet.

The study, published in the journal Geophysical Research Letters, reveals a discovery at the bottom of the Okinawa Trough off Japan of perhaps as much as 100 million tons of either methane, which could be used as a potential energy source, or carbon dioxide, which LiveScience described as a "ticking time bomb." It could also be a combination of the two, according to LiveScience.

Researchers at Kyushu University have located a large gas reservoir below an axis of rifting based on an automated method for deriving seismic pressure wave velocity from seismic reflection data. The reservoir can be seen in this two-dimensional seismic velocity mapping, which spans a depth of about 3.5 km below sea level and a distance of about 6.5 km, as a dark-blue area of low velocity within green areas of higher velocity. (Credit: Takeshi Tsuji, Kyushu University)

UN REPORT ON WORLD'S OCEANS IS DAMNING: 'WE'RE ALL IN BIG TROUBLE'

"While many people focus on greenhouse gases made by humans, a huge variety of natural sources also exist," the study's co-author, Takeshi Tsuji, said in a statement. "Large-scale gas reservoirs along a rifting axis may represent another source of greenhouse gases that we need to keep our eyes on. Or, they could turn out to be a significant natural resource."

To generate seismic waves in an effort to identify how much gas is stored in that part of the ocean, the researchers sailed toward the middle of the trough and then used an air gun to create the waves.

"Seismic pressure waves generally travel more slowly through gases than through solids," the study's co-author, Andri Hendriyana, added in the statement. "Thus, by estimating the velocity of seismic pressure waves through the ground, we can identify underground gas reservoirs and even get information on how saturated they are. In this case, we found low-velocity pockets along the rifting axis near Iheya North Knoll in the middle of the Okinawa Trough, indicating areas filled with gas."

LAB-GROWN CORAL COULD SAVE ENDANGERED REEFS

In turn, the researchers found that as the velocity of the wave slowed down in certain parts, this signified the presence of the gas pocket.

But what the gas pocket is comprised of is of intense interest, given that it could have a significant impact on climate change, assuming it is carbon dioxide.

Tsuji added that it's likely more zones like these exist, so further study is needed.

"Zones like the one we investigated are not uncommon along rifts, so I expect that similar reservoirs may exist elsewhere in the Okinawa Trough as well as other sediment-covered continental back-arc basins around the world," he said.